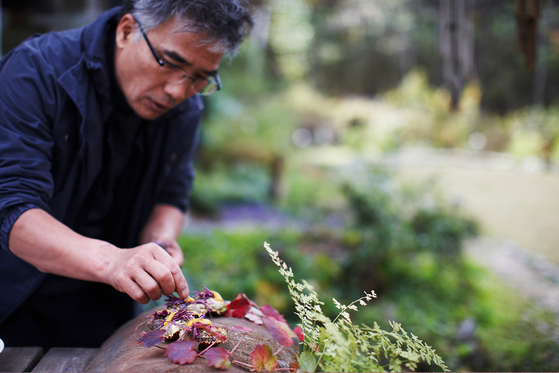 A scene from the documentary ″The Wandering Chef″(2018) directed by Park Hye-ryeong shows the celebrity chef Im Ji-ho, famous for wandering in search of food ingredients from nature. Im died of a heart attack Saturday at the age of 65. [AT9 FILM]


Im Ji-ho, a culinary researcher, chef and TV personality nicknamed “the wandering eater” and "the wandering chef," died of a heart attack Saturday, his family said. He was 65 years old.

Im was known for traveling through various parts of Korea and other countries in search of unique culinary and medicinal ingredients from nature, and creating new food with them. He made those culinary expeditions for four decades.

Born in Andong, North Gyeongsang, Im learned from childhood how to search for medicinal herbs from his father, who was a doctor of traditional Korean medicine. He worked as a hotel restaurant chef briefly when he was young but quit to satisfy his wanderlust.

Since the early 2000s, Im operated his own restaurants serving unique Korean cuisine, while continuing his travels in search of new natural ingredients. He participated in cuisine-related events overseas such as the United Nations Korean Food Festival in 2003. He was also called on to prepare menus and meals for important events such as a dinner meeting between President Moon Jae-in and business leaders in 2017.

Im's public profile grew mainly through SBS TV’s weekly show “How To Eat and Live Well,” which was aired from early 2014 to late 2016. As a co-host of the show, he solicited requests from people living in various parts of the country who wanted a special meal for a celebration or other reasons, like healing. He and his crew traveled to visit the person and served a meal made with ingredients found during on the trip.

Im appeared on a number of popular programs, including SBS TV’s "Master in the House," "Law of the Jungle" and the cable channel MBN’s "Eat More & Go."

“The Wandering Chef,” a documentary about Im’s life and culinary philosophy, was made in 2018 and released in 2020. Director Park Hye-ryeong said in an interview in Forbes Magazine in 2019, “I was really impressed by his knowledge and also the stories he had behind food… I distinctly felt that he was different from other chefs that I’d met in that he would use ingredients that people no longer used, things people threw away, seemingly useless ingredients, and then transform them into very rich food creations.”

His funeral is scheduled for Monday.

Producer of 'Street Man Fighter' stands behind her show

Cuisine by Koreans around the globe recognized by The Michelin Guide