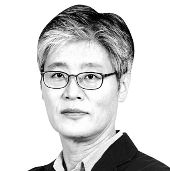 Lee Hoon-beom
The author is a columnist of the JoongAng Ilbo.


As I have observed over the last four years, excusing themselves and blaming others for anything is the intrinsic nature of the leftist forces. The history of those attributes is not very short. It coincided with the birth of Communism a century ago. The feature even persisted during the tense ideological war between the left and the right afterwards.

Leftist intellectuals in the West were not oblivious to the cruelty of the Soviet system under Stalin’s rule. But their self-esteem didn’t allow them to stop extolling Communism. As a result, they were forced to use double standards when they advocated the Soviet ideology or defended themselves.

A classic example is George Bernard Shaw. When Joseph Stalin mercilessly purged his political enemies, Shaw famously said, “We cannot afford to give ourselves moral airs when our most enterprising neighbor, the Soviet Union, humanly and judiciously liquidates a handful of exploiters and speculators to make the world safe for honest men.”

German poet and playwright Bertolt Brecht went a step further. “Even in the opinion of the bitterest enemies of the Soviet Union and of her government, the trials have clearly demonstrated the existence of active conspiracies against the regime,” he said, suggestive of his sympathy with Stalin’s pitiless trials in Moscow after the October Revolution.

To those who know exactly what happened to the Soviet Union seven decades later, such compassionate rhetoric could be hard to swallow. But those intellectuals at least had a modicum of conscience as they certainly tried hard not to make their comments sound like sheer sophistry even while trying to keep their faith in Communism.

Sadly, such timid traits of the leftists are revived in this country — in a more degraded form. The list includes Rhyu Si-min, a very assertive writer, commentator and former welfare minister in the progressive Roh Moo-hyun administration. He infamously defended controversial former Justice Minister Cho Kuk’s wife by saying, “She removed the hard drive of her PC to protect evidence of her innocence, not to destroy evidence of her wrongdoing.” And there is former Justice Minister Cho himself, who has even published an autobiography crammed with generous self-excuses and pointed attacks on others. The book will most likely boomerang soon.

The 1980s’ left-wing student activists who are the mainstream in the liberal Moon Jae-in administration are unrivaled at justifying themselves and all they do and believe. They have not changed a bit since taking power in May 2017. The ruling Democratic Party (DP) sometimes acts as if it wants change, but the government does not show any sign of reinvention.

It was not a minor mistake when the opening video for the virtual P4G Summit in Seoul last month showed a satellite picture of Pyongyang instead of Seoul. That gave a laugh to the entire world. The liberal government should have apologized for the fiasco, held someone accountable, and vowed to not repeat such a mistake in the future. But no one did. A Blue House official took a step further and said, “What’s wrong with that? It was an international event after all!”

The Moon administration’s lopsided reshuffle recently of the prosecution shows it all. Justice Minister Park Beom-kye promoted all the prosecutors loyal to the government while demoting any prosecutors attempting to look into dirt on the powers that be. And yet Park nonchalantly said he did his best to uphold the principle of fairness in appointments. Who would not laugh at such ridiculous remarks?

A highlight of this ongoing farce was the latest decision by the new Corruption Investigation Office for High-ranking Officials (CIO) to investigate former Prosecutor General Yoon Seok-youl, who tried to bring into the light a plethora of suspicions involving the government and the Blue House before he had to leave the prosecution in March over irreconcilable disagreements with the justice minister.

I don’t want to repeat what other newspapers have said in their editorials. Instead, let me just quote a decent leftist who was not obsessed with ideology but broad-minded enough to accept mistakes at system levels.

In the early stage of reform in 1979, Chinese leader Deng Xiaoping visited the United States. At a White House dinner honoring Deng, actress Shirley MacLaine sat next to him. She told Deng about a Chinese scientist she had met who said he was happier and more productive working on a Chinese farm. She said she had been deeply impressed by the scientist. At that moment, Deng cut her short. “He lied. That was what he had to say at the time,” Deng retorted. That’s telling it like it is.