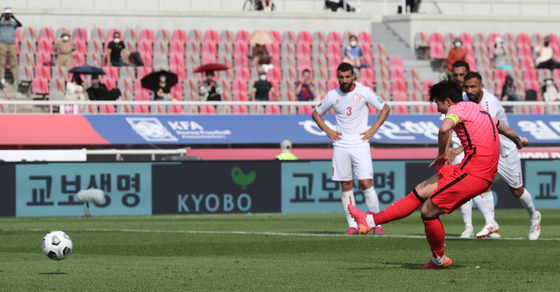 Son Heung-min scores a penalty to give Korea a 2-1 lead over Lebanon in a World Cup qualifier at Goyang Stadium in Goyang, Gyeonggi on Sunday. [NEWS1]


Korea beat Lebanon 2-1 in a hard-fought game on a very hot day in Goyang, Gyeonggi on Sunday, finishing the second round of Asian World Cup qualifiers with five wins and one draw.

Korea was on the offensive from the start, breaking through the Lebanon defense multiple times only to struggle to get the ball on target. Lebanon had no such problems, scoring their first goal in the 12th minute to take a 1-0 lead.

The Taeguk Warriors were forced to take on Lebanon without star center back Kim Min-jae, who sat out Sunday’s match after accumulating two yellow cards in previous games. His absence was obvious as Lebanon carved through the defense to score their first goal, facing little opposition without Kim to anchor the backline.

Korea went straight back on the attack but struggled to break through a significantly bolstered Lebanese defense. The best chance came in the 25th minute, when captain Son Heung-min beat the goalkeeper only to have the ball bicycle-kicked off the goal line by a defender.

A water break was called at 30 minutes, under FIFA rules that allow breaks to be called any time after 30 minutes into a game played in extreme heat. The temperature in Goyang on Sunday afternoon at points reached 28 degrees Celsius (80 degrees Fahrenheit).

Korea continued to pressure the Lebanese defense throughout the final 15 minutes but were unable to break through, and the first 45 minutes ended with Lebanon up 1-0.

Despite multiple chances throughout the half — 10 to Lebanon’s one — the Taeguk Warriors struggled to break through a Lebanese side that were playing a very different style of football. Lebanon focused on sheer weight of numbers to overpower Korea’s attacks, with at least eight bodies in the box ready to obstruct every shot on goal.

Much to head coach Paulo Bento’s frustration, Lebanon also repeatedly used the referee to their advantage, dropping to the ground at every opportunity and using every apparent injury to delay the game for a few minutes. Despite the constant interruptions, no cards were given throughout the first half.

Korea made one change going into the second half, bringing on Nam Tae-hee for Lee Jae-sung to add some new legs to the midfield. Nam, who plays for Qatari side Al-Sadd, is also more experienced to playing in extreme heat.

The Taeguk Warriors struck almost immediately, scoring a much-needed equalizer in the 51st minute. The goal came on Korea’s ninth corner of the game, as Son’s cross found Song Min-kyu’s head in the box, beating the keeper to take the score to 1-1. 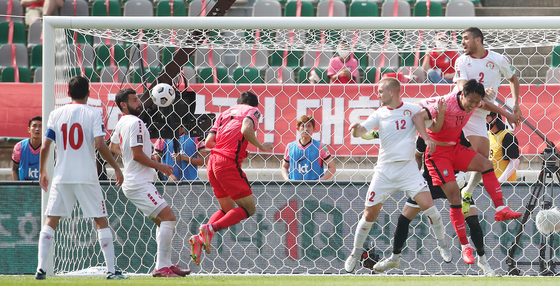 Song Min-kyu heads in a free kick to tie the score at 1-1 in a World Cup qualifier against Lebanon at Goyang Stadium in Goyang, Gyeonggi on Sunday. [NEWS1]


Bento made a defensive change in the 62nd minute, bringing on Lee Yong for Kim Moon-hwan.

Korea's opportunity to pull ahead came in the 63rd minute after a Lebanese defender knocked the ball away with his hand, interrupting Nam’s attack in the box. The referee pointed to the spot and Son stepped up to get the job done, slotting the ball underneath the diving goalkeeper and into the bottom right corner to take the score to 2-1.

Park Ji-su left the pitch with back pain after the goal, with Won Du-jae coming on to take over in defense.

Bento made two more changes in the 82nd minute as play settled into the midfield, bringing on Son Jun-ho and Hwang Hee-chan to take over from Kwon Chang-hoon and Song.

The addition of the two new midfielders didn’t give Korea the edge Bento might have hoped for, and despite a couple more opportunities the game ended with Korea up 2-1.

The 2-1 win, while not as decisive as the two 5-0 victories the Taeguk Warriors managed last week, still shows signs of improvement. The first leg between the two countries, in Beirut on Nov. 14, 2019, ended 0-0.

Korea finishes the second round of Asian qualifiers for the 2022 Qatar World Cup at the top of Group H with five wins and one draw.

At the end of 2019, Korea beat Turkmenistan 2-0 and Sri Lanka 8-0 before drawing 0-0 with Lebanon. Korea also drew with North Korea, but as they have since withdrawn from the competition, that score no longer counts.

In the second legs, all played in Korea over the last 10 days, Korea beat both Turkmenistan and Sri Lanka 5-0 each, with Sunday’s 2-1 victory over Lebanon completing the set.

As the top-ranked team in Group H, the Taeguk Warriors will now progress to the third round of World Cup qualifiers, due to begin in September this year. The win also secures Korea a spot in the 2023 AFC Asian Cup.

The top team from each group in the second round qualifies for the third round of qualifiers, alongside the four best second-place teams. The 12 teams that reach the third round will be sorted into two groups of six, again playing round robin home and away matches.

The top two teams from each of those group will immediately qualify for the World Cup, while the two third-placed teams will play each other for the right to compete in the inter-confederation playoffs.

Korea joins Japan, Syria and Australia in the third round of qualifiers, with the other teams to be determined in the coming week.

Qatar also topped their group, but as the host of the World Cup they earn an automatic berth and were only competing to secure a place in the Asian Cup. Their third-round spot will be given to the fifth-best second-place team.

Lebanon also have a shot at earning a spot in the third round, although they could still be overtaken in the runner-up standings in the next few days.

The draw for the third round is set to take place on June 24 in Malaysia. Teams will be drawn from six pots each containing two teams based on their FIFA World Ranking. As the third-ranked team in Asia after Japan and Iran, Korea is guaranteed a spot in either Pot 1 or 2 depending on whether Iran reach the third round.

Games are scheduled to begin on Sept. 2.

While the senior squad have finished their fixtures, the U-23 team will be back in action on Tuesday in a pre-Olympic friendly against Ghana at 8 p.m. at Jeju World Cup Stadium in Seogwipo, Jeju. The two sides also faced off on Saturday, with Korea winning 3-1.