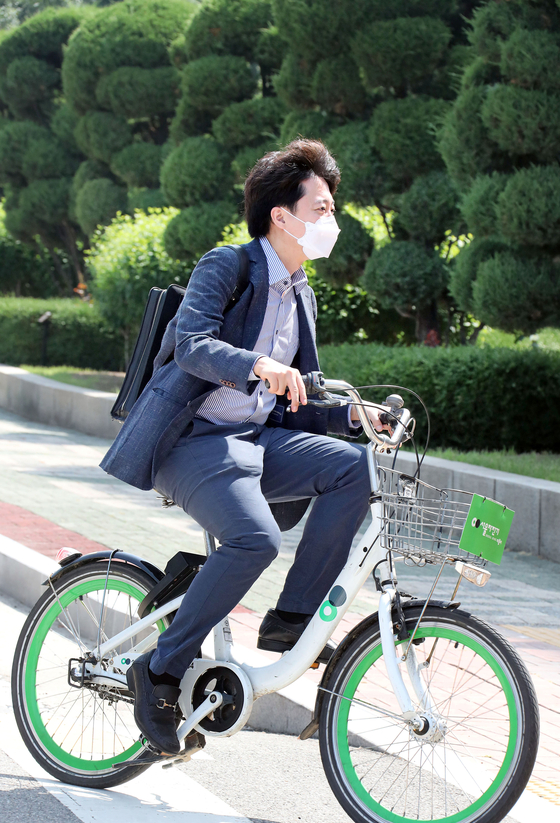 Others criticized Lee for recklessly refusing to wear a helmet.

Koreans commonly use the Ttareungi brand name to refer to any rental bike.

A source from the PPP chairman’s office said that Lee “regularly uses a ttareungi on his commutes” and that although the party will soon provide him with a vehicle, they have yet to find a driver.

Lee, a 36-year-old politician with no experience as a lawmaker, took the helm of the People Power Party (PPP) as the youngest-ever leader of a mainstream party in modern South Korean politics on Friday.

In a leadership election, Lee won 43.8 percent of ballots cast online and by telephone by party members and members of the general public between June 7 and June 10, defeating four senior rivals, including former four-term lawmaker Na Kyung-won and incumbent five-term Rep. Joo Ho-young, both of whom served as floor leaders.

Lee’s use of a rental bicycle strikes a stark contrast with the average politicians with sleek black cars, often chauffeur-driven.

Critics were quick to point out that the use of public bicycles such as Ttareungi's and rental bike systems operated independently by city districts require the use of a helmet, which Lee did not wear in photos taken of him during his commute.

Lee himself weighed in on the discussion.

“When I looked on the Internet after finishing work, I saw that ttareungi had become a hot topic,” Lee wrote on his Facebook page. “The subway and the ttareungi are the best transport options in Seoul.”

Lee praised the economics of using the subway and rental bikes for urban travel, saying he can keep monthly commuting costs to under 60,000 won ($57).

Lee expressed dismay that electric scooters had become more strictly regulated, commenting on a radio show on Friday that he used to use them even more often than ttareungis.

However, using a bike without a helmet is not currently punishable with a fine.

The Seoul city government, which operates the Ttareungi system, briefly offered a helmet rental service in 2018 but the service was suspended after a few months due to low user numbers and a high number of lost helmets.

Next steps for Yoon and the PPP