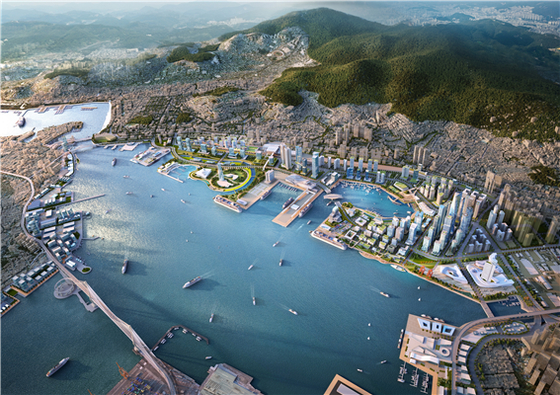 An area near the Busan North Port, where the Busan city government is proposing to hold the World Expo in 2030. [BUSAN METROPOLITAN CITY]

Busan is hoping to host the World Expo in 2030, the city government announced Monday.

“The mayor and Trade Minister Yoo Myung-hee will be traveling to Paris from June 21 to 24 to submit Busan’s bid to the BIE [Bureau International des Expositions],” the city government said in a statement.

Busan will propose to host the Expo from May 1 to October 31, 2030 on a 2.7 million square-meter (29 million square feet) area near the Busan North Port, a part of the Busan Port that is being redeveloped.

If the city wins, it would be the first city in Korea to host a World Expo. Specialized Expos, or expos on a smaller scale and of a shorter duration than World Expos, have been held in Daejeon in 1993 and Yeosu, South Jeolla, in 2012, both for three months.

“Through the Expo we hope to be able to showcase to the world the next-generation displays, semiconductors, artificial intelligence, robotics and other high-tech products, as well as our initiatives on energy transformation and green development for the future of combating climate change,” the city government said in its statement.

“As a city that has been annually hosting the Busan International Film Festival and G-Star [game exhibition], we have the capacity to host the Expo and showcase to the world Korea’s growing soft power.”

Following his return from Paris, Mayor Park Heong-joon will join an online meeting on June 29 with heads of other cities around the world announcing bids including Moscow, Zhengzhou in China, Saudi Arabia’s Riyadh, Spain’s Barcelona and Canada’s Toronto.

The BIE will visit the cities to examine sites. It will hold a vote of BIE members in November 2023 to decide the final choice.

Next month, Busan will launch a special committee to prepare the bid. The committee will be headed by Kim Young-joo, former trade minister, and consist of some 1,000 members from business, media and culture circles, as well as executives of conglomerates including Samsung, Hyundai Motor Group, SK, LG and the Lotte Group.

The central government will create its own committee to work on the bid. The committee will be headed by the prime minister and work closely with the city government's committee.