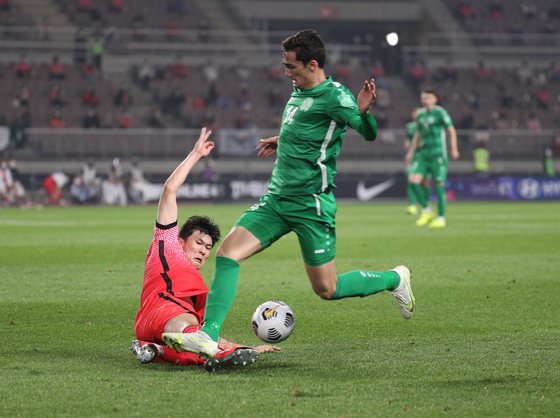 Kim Min-jae slides into a tackle as Korea take on Turkmenistan in a World Cup qualifier at Goyang Stadium in Goyang, Gyeonggi on June 5. [NEWS1]


Kim "The Monster" Min-jae has drawn interest from Portuguese side FC Porto, according to reports Sunday, adding yet another top-tier club to the list of teams interested in recruiting the formidable Korean center back.

According to Portuguese football news website Record, Porto are interested in Kim, who currently plays for Beijing Guoan, and are currently working on recruiting him.

Porto is one of a number of top European clubs to show an interest in Kim. Earlier this month, Kim was linked to Italian Serie A club Juventus, with reports going so far as to say the club had already agreed a deal with Beijing, where Kim is under contract. When asked to comment on the story last week, Kim said he didn't think he was good enough to play for the club.

Kim has 32 caps for the senior Korean men’s team and appeared for the U-23 team eight times, including at the 2018 Asian Games. Kim’s international performance has gained him a lot of attention, earning him the nickname The Monster for his ferocious defense during the 2017 Asian qualifier for the 2018 Russia World Cup.

Prior to Juventus and Porto, Tottenham Hotspur also tried to acquire Kim last year, and Chelsea and Liverpool have both shown an interest in signing him.