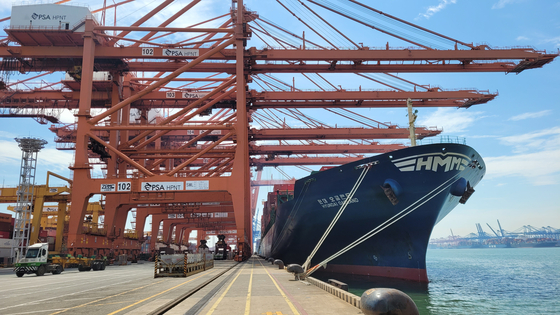 HMM ship at a port in Busan [HMM]


HMM shares dropped more than 6 percent during intra-day trading on Tuesday following the Monday announcement by Korea Development Bank (KDB) – its state-run lender – that it would exercise its conversion rights for the company’s convertible bonds.

Investors were worried about the state-run bank’s planned exercise of its conversion rights, which could drag down the company’s share price.


The KDB "plans to exercise the right to convert bonds that are worth 300 billion won, and whether it will sell HMM has not yet been decided,” said Lee Dong-gull, chairman of the KDB, in an online press conference held Monday afternoon. “It will be a malpractice to give up on this profit when there is an opportunity.”

KDB owns around 12 percent of HMM. If it converts the bonds into stock, its stake will rise to 25.9 percent.

It is expected to earn more than 2 trillion won in profit if it converts the bonds and sells them.

If KDB decides to sell HMM shares following the conversion, the company’s share price could fall rapidly, though some speculate that KDB may sell all its shares in HMM to another party.

If that happens, the share price may not be affected as the newly issued shares would not reach the market.

Meanwhile, HMM on Tuesday said a server at its headquarters was hit with a virus attack on Saturday.

It said that damage was limited because it adopted a cloud system last year.