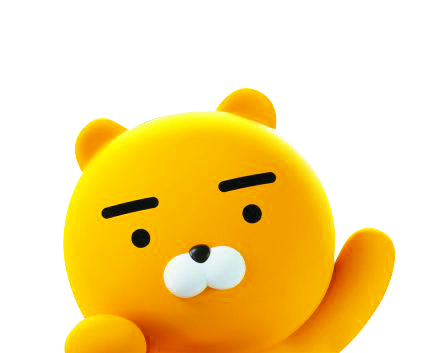 Kakao's stock was on a winning streak for seven straight trading days, boosting its share price by 14.6 percent from June 7 to Tuesday.

During Monday’s trading, the operator of Korea’s most used messenger app, KakaoTalk, saw its market cap race ahead of Naver's at one point but retreated back to fourth place by the end of session.

Kakao’s shares' performance is impressive especially considering the market cap gap it had with Naver until a few months back.

In late December, Kakao was the ninth largest company on the Kospi bourse, and Naver was the sixth. Its market cap was 34.4 trillion won compared to Naver’s 48 trillion won.

Both companies' shares have done well this year. Combined, they added 44 trillion won to their market caps, rising above LG Chem and Samsung Biologics. Now, the two IT leaders only have memory chip makers Samsung Electronics and SK hynix ahead of them.

Both companies benefitted from the coronavirus pandemic and the growth for IT services that came with it.

Naver started out as an internet portal while Kakao began as a messenger service. But today, a lot of their businesses overlap in ecommerce, fintech and media content like webtoons.

On April 15, Kakao instituted a five-to-one stock split which slashed the company’s stock price from around 550,000 won to 110,000 won. This made its shares more accessible to individual investors, who have driven the stock market's growth during the pandemic. From mid-April, Kakao’s stock price jumped 20 percent.

Analyst Sung Jong-hwa of eBest Securities points out that both companies did good jobs in their respective businesses but Kakao was the one that aggressively boosted shareholder value.

“The evaporation of the market cap gap between the two comes from decisions made in platform strategy,” Sung said. “Kakao made a bold move to establish an internet-only bank [in 2016] and recently, has been spinning off affiliates, pushing efforts to take some of them public.”

Local analysts’ consensus is that Kakao’s stock will remain strong for a while. Coming up are initial public listings of fintech subsidiaries Kakao Pay and Kakao Bank, both of which applied for approval earlier this year.

“Naver’s operating costs have been rapidly increasing since the second half of 2020,” Jung wrote in a May 27 report.

“A big contributor to the recent increase was human labor costs for its development and operation workforce, and marketing fees. But as the company’s revenue projection is strong, the profitability growth will normalize once the cost increases slow down.”