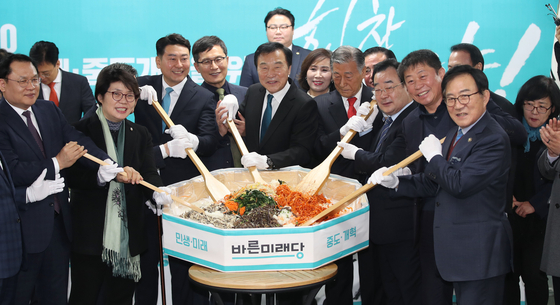 Bibimbap is a popular dish among politicians as it symbolizes harmony and co-existence. At the end of the Grand National Party presidential primary in 2007, Lee Myung-bak, Park Geun-hye, Won Hee-ryong and Hong Joon-pyo are bibimbap. As the opposition party was divided into the pro-Lee and pro-Park faction, party chairman Kang Jae-sup came up with the idea to promote unity.

Five days before the 20th parliamentary election in 2016, ruling Saenuri Party head Kim Moo-sung held an emergency election committee meeting and ate bibimbap. He meant to appeal to the voters by repenting the embarrassing factional dispute and demonstrating unity.

Since President Moon Jae-in was inaugurated in May 2017, bibimbap was the dish of choice for luncheon meetings at the Blue House with National Assembly floor leaders. In 2018, a “five-color bibimbap” representing the five party colors was offered. It was reportedly hard to find minty greens to represent the Bareunmirae Party. Bibimbap was also served at Moon’s most recent meeting with the five party leaders on May 26 at the Blue House.

Lee Jun-seok, a 36-year-old political rookie, has become the youngest leader of the conservative opposition People Power Party (PPP). He presented his “bibimbap theory” as his first message. “What I like to stress the most is co-existence. Bibimbap looks most delicious when more than 10 toppings are on the rice while maintaining their unique taste and color. I don’t want to imagine grinding and mixing all the ingredients together.”

I find this over-used bibimbap theory refreshing because the bibimbap spirit hasn’t been that popular in Yeouido recently. At the party leadership election, Na Kyung-won, a former PPP floor leader who came in second place, emphasized the “melting pot.” A melting pot is more about fusing and mixing rather than co-existing.

The ruling Democratic Party (DP) emphasized its “one team” from the beginning of the 21st National Assembly. In his acceptance speech, DP leader Song Young-gil said that the party will win the presidential election as “one team.” The DP has far more young politicians than the PPP, but no notable figure or remarks appeared from those first-term lawmakers. President Moon met with 68 first-time DP legislators on June 3 and stressed the one-team spirit and “winning support by uniting internally and expanding externally.”

The PPP’s Lee Jun-seok wants to be the sauce that brings flavor to different ingredients. Can his bibimbap theory help bring a new trend to Yeouido?.

Is a comeback possible for Lee Jun-seok?