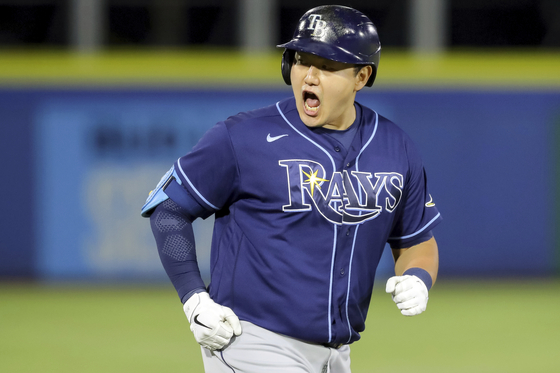 
Choi Ji-man of the Tampa Bay Rays returned to the lineup on Monday, rejoining the club after spending 10 days on the injured list.

Choi didn't pick up a hit against the Chicago White Sox at Guaranteed Rate Field in Chicago on Monday, but was walked twice in the 5-2 win.

Choi was placed on the 10-day IL on June 4, backdated to June 3, after straining his groin during a game against the New York Yankees on June 1. He appeared as pinch hitter the following day, further aggravating the injury.

Choi has only appeared in 16 games so far this year after starting the season on the IL after undergoing knee surgery during spring training. He's been explosive at the plate since rejoining the Rays on May 16, with 14 hits, eight runs, 11 RBIs and two home runs for a .292 batting average and a .500 slugging percentage.

Choi isn't the only Ray having a good season — the Florida team is dominating the American League East with 43 wins and 24 losses, a solid three games ahead of the second-place Boston Red Sox. The Rays have gone 8-2 over the last 10 games.