DWG KIA had a bumpy start to the summer split last week, managing to eke out a 2-1 victory against T1 in their opening match but then suffering a 0-2 upset defeat at the hands of KT Rolster two days later.

While part of the team's shaky form could certainly be attributed to fatigue — they had either been in quarantine or competing in the Mid-Season Invitational over the past seven weeks — concerns around some members' individual form are continuing to rise.

Following are edited excerpts from our chat last Friday with DWG KIA's ace mid laner Heo "ShowMaker" Su, which took place right after their victory against T1. The full video of the interview is available on the Korea JoongAng Daily YouTube channel. 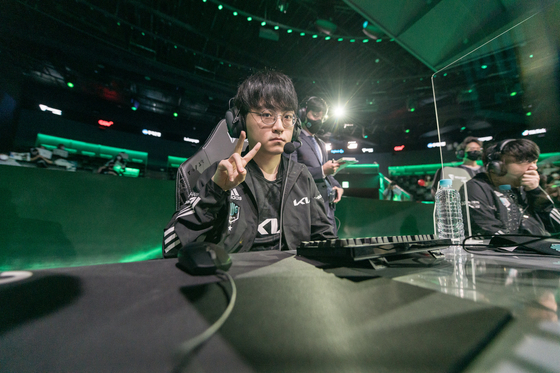 
Q. The match didn't exactly go smoothly. I imagine you're not too happy about how close the win was.

A. Well actually, I don't think our team is that good at the moment, so I'm satisfied that we managed to secure a win.


Q. You returned to stage almost right after quarantine ended. Did you have enough time for practice?

A. Well, practice went on even during quarantine, so I don't think we lacked time in that regard. But quarantine isn't exactly that comfortable, so I think fatigue was an issue.


Q. The meta shifted a lot after spring split ended. Did playing at MSI help you adjust to Patch 11.11?

A. Yes, it helped, but it didn't help that much, because at MSI, only three junglers saw play: Udyr, Morgana, and Rumble. But now Morgana has been severely nerfed and a wide range of junglers are seeing play, so it's different. Gwen and Viego are also now available. So I don't think it helped that much, but still, it did help a little.


Q. HexFlash was suddenly banned before the split began. Did this hamper bot lane preparations?

A. Well... I guess it had some influence. Most if not all supports take HexFlash nowadays, and some supports just can't function without it. Apart from those champions, though, I guess there isn't much of an influence. Also, the opponent can't use it either, so it's a shared nerf, so it's also still fair, in a way?

Only Sett really comes to mind. HexFlash is Sett's lifeblood, almost, so I think only Sett was hit really hard.


Q. What's your mindset going into this split?

A. This split is really important since it's linked with Worlds, but we have our eyes set on the long term. So regardless of immediate results, we'll try to have fun while playing, and ultimately emerge as the victor.