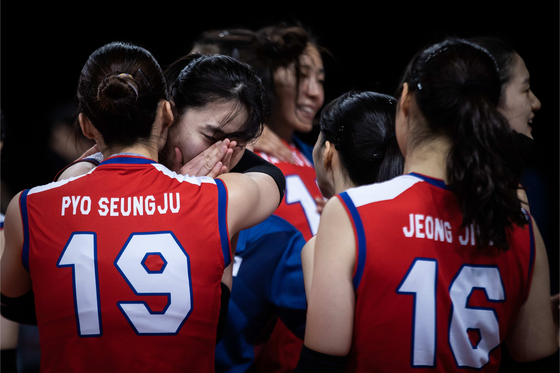 Team Korea celebrates their third win of the Volleyball Nations League 2021 after beating Canada 3-2 in Rimini, Italy on Monday. [FIVB]


Korea's national volleyball team got their third win of the Volleyball Nations League 2021 on Monday, beating Canada 3-2 in Rimini, Italy.

Korea went into the game with some momentum, having picked up their second win of the tournament against Serbia on Sunday.

This year is Canada's debut at the Volleyball Nations League and Korea has already beaten the Canadian team twice before.

Despite that record, in the first set, Korea appeared to be unable to figure out the Canadian side, quickly allowing Canada to take the lead. Trailing by eight points in just ten minutes, Korea fought back hard to get back into the game.

Jeong Ji-yun, Korea's second-highest scorer in the game against Serbia on Sunday, smashed 87 kilometer-per-hour spikes into the Canadian court, but despite that aggressive rally, Korea still had to concede the first set 25-15.

Korea opened the scoring in the second set, adding five consecutive points in a row. Canada caught up quickly, but Korea was showing a much better defense than in the first set, digging serves and demonstrating stable receives against the Canadian side to eventually take away the second set 25-18.

Korea started out leading the third, but Canada wasn't ready to give up and pushed the set to 21-22, with Korea just a point ahead.

Kim Yeon-koung's spike seemed to take Korea closer to winning the set, but VAR put the ball out of bounds and the score went to 23-23.

The game went on to a fourth deuce when Canada's spike seemed to have missed the line. Again, VAR stepped in to Korea's disadvantage, proving Korea had touched the ball slightly and the score flipped to 28-27, with Korea losing by one point. Canada added another point to take the third set.

At two sets to one, Korea came back with a vengeance in the fourth but Canada again held on for a 16-16 tie. Park Jeong-ah came out with strong attacks, adding three consecutive points to take a 19-16, with Korea ultimately winning the set 25-20.

With two sets each, the game was forced into a fifth set with 15 points instead of 25 to win.

Canada started out leading the final set 4-1 but Korea pushed the game to a 14-14 tie and five match points, going on to win the set and take the hard-fought game. 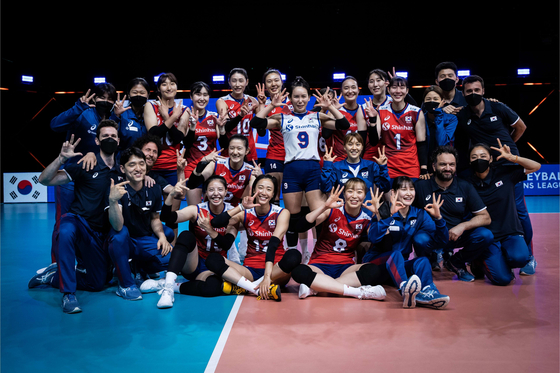 
The match against Canada demonstrated the importance of a strong defense. A stronger defense gave Korea more confidence in their attacks that led to attacking points but also to more aces.

Park scored the most points, at 24, alongside Van Ryk of Canada.

"It was a really tough game and I'm really happy that we won" Park told Volleyball World after the match. "Since we were serving really strong to make them struggle in passing, they were not able to play fast as they mainly had to play high balls, so it was important for us.

"Next week we will try to win as many games as possible."

With three wins and nine losses, Korea sits at 14th on the table and has three more matches left against Brazil, Turkey and the Netherlands.

Korea will next face Brazil at 3 p.m. on Friday.