[Road to 2050] Wind, water, sun and hydrogen, Korea goes all in on renewables

[Road to 2050] Wind, water, sun and hydrogen, Korea goes all in on renewables 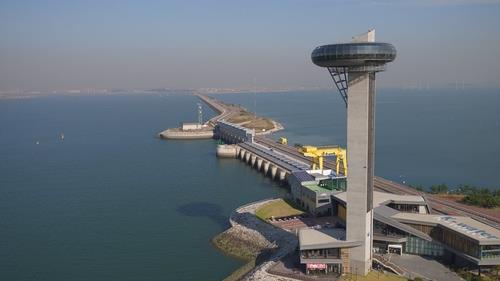 The extensive seawall that also operates the world's largest tidal power plant in Ansan, Gyeonggi. The city, which has the lead in energy self-sufficiency of which nearly 10 percent is generated from renewable energy, plans to expand its renewable energy capacity including windfarms and offshore solar farms. [YONHAP]

It is now transforming into something of a hub for renewable energy. Ansan is a model city for the development of the relevant technologies, especially those related to water resources.

According to the city government, 85 percent of the energy used by the city is generated within it, and renewable energy accounts for nearly 10 percent, which is higher than the national average.

The city not only has wind and solar farms but Ansan is also home to the world’s largest tidal power plant. It’s hard to miss the massive generators along the 12.7-kilometer (7.9 mile) seawall.

The Sihwa Lake Tidal Power plant, operated by Korea Water Resource Corp. (K-water), which was completed in 2011, is the world’s largest, with total power output capacity of 254 megawatts.

This tidal power plant generates 552 gigawatt-hours of electricity annually with the natural ebb and flow of the ocean. According to K-water, the power is supplied to nearby cities.

Ansan also operates five wind generators, which have been installed since 2010.  The wind turbines generate 3,969 megawatt-hours of electricity annually, which powers roughly 1,300 households and reduces carbon emissions by 1,920 tons a year.

The city is already planning to expand its windfarm, where it will add 25 wind turbines, each with the capacity of 8 megawatts, starting 2023.

Once completed, the electricity generated from the wind turbines will be supplying power to 160,000 households.

Ansan is also working on developing a floating solar farm by 2026 covering 1.12 square kilometers and generating 102.5 megawatts of power. This would provide electricity for 35,000 households.

Through these projects, it hopes to raise the energy supplied via renewables to 30 percent by 2030, up from current 9.7 percent.

The extracted hydrogen will not only be used in public and private transportation within the city but also be used in electricity and heating for residents and industry.

“Ansan is not only leading in energy self-sufficiency through renewable energy sources among cities in Gyeonggi but in the entire country,” said Heo Jae-pil, an official at the Ansan government’s environment policy department.

Ansan is a glimpse of future envisioned by the Moon Jae-in government.

It took a step further last year when, in October, President Moon set a target of carbon neutrality by 2050. In following up on the plan, the government’s budget on renewable energy was increased 36 percent to 1.2 trillion won ($1.0 billion).

Solar continues to be in the lead, as it accounts for 22.8 percent of all renewable energy generated.

The solar panels, which are less costly and easier to install than wind farms, added 3.8 gigawatts of new capacity, which was 84.5 percent of the newly installed renewable energy capacity in 2019.

The government is increasing its investments in windfarms.

President Moon in February visited Sinan in South Jeolla, where he announced the establishment of the world’s largest offshore windfarm, with a capacity of 8.2 gigawatts .

A total of 48.5 trillion won will be poured into the windfarm development by 2030.

The government emphasized that the 8.2 gigawatts is equivalent to eight nuclear power plants and seven times the size of the current title holder, Britain’s Horn Sea, with a capacity of 1.12 gigawatts.

Under the plan, the government aims to increase the ratio of wind power both on land and offshore to 10.2 percent of renewable energy by next year and further raise it to 31.9 percent by 2030. By 2034, it plans to raise the ratio to 35.1 percent.

But among renewable energies, the government is particularly focusing on hydrogen energy, where it plans to lead globally.

In July last year, it formed a Hydrogen Economy Committee of eight government departments and ministries, including the Finance Ministry, the Science and ICT Ministry and the Environment Ministry. It is led by the Prime Minister.

The committee includes leaders from the private sector, including Hyundai Motor Group Chairman Euisun Chung as well as research institutions.

The role of the committee is to set the national agenda and blueprint for the hydrogen economy.

Under the plan, the government will support 500 companies that specialize in hydrogen energy by 2030 and double that figure to 1,000 by 2040.

Additionally, with government support, including subsidies on hydrogen vehicles, the government committee blueprint included an increase in the number of hydrogen-fueled vehicles sold in the country from 4,194 units in 2019 to 850,000 in 2030.

The number of charging stations will be increased from 34 to 660 during the same period.

The committee has also announced a 34-billion-won fund investing in the development of hydrogen mobility, hydrogen fuel cells, liquid hydrogen and charging stations.

Up to 1.5 billion won will be invested annually for five years in the development of materials, parts and equipment related to the hydrogen energy.

Among its plan are the development of hydrogen-economy cities, including Ansan, Ulsan, Jeonju, Wanju and Samcheok.

Of the five New Towns to be built by 2022, the government will select two as hydrogen cities, where hydrogen-fueled public buses will be operating and hydrogen charging stations will be constructed.

It emphasizes Korea being the world’s first to commercialize hydrogen-fueled vehicles, with 99 percent of parts developed domestically. 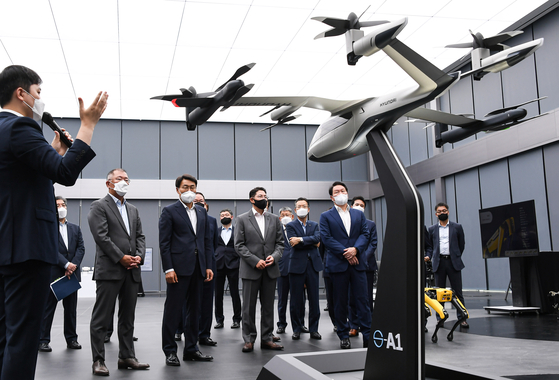 The committee is expected to be formally established in September after confirming additional members.

“The role of business is important in fostering the hydrogen industry,” SK Group Chairman Chey Tae-won said. “We will work so that [Korea] will emerge as a global powerhouse in hydrogen.”

According to the Hydrogen Economy Committee, hydrogen energy will account for 18 percent of the world’s energy consumption by 2050. The hydrogen market is projected to amount to $2.5 trillion by 2050, creating 30 million jobs.

In a 2019 report, McKinsey projected hydrogen energy will account for 21 percent of Korea’s energy by 2050.

Hyundai Motor Group is not only the world’s first in succeeding in the commercialization of hydrogen fuel vehicles, with the Hyundai Tucson FCEV in 2013, but also leads in production.

According SNE Research, last year 9,000 hydrogen-fuel vehicles were sold globally. Of that total, 69 percent were Hyundai Motor’s while Japan’s Toyota trailed at 17 percent and Honda 2.5 percent.

Hyundai Motor in July last year exported 10 hydrogen Xcient trucks to Switzerland. The company plans to gradually increase the export to 1,600 units by 2025.

Posco in December announced a plan to make hydrogen its new growth engine, which includes producing 5 million tons of green hydrogen by 2050.

According to the steel maker, it is producing 7,000 tons of hydrogen annually in the process of steelmaking.

Hyosung plans to build a liquefied hydrogen plant with a 13,000-ton capacity by 2023 in Ulsan. The business group plans to build 30 such plants throughout the country.

While numerous countries including the U.S. have announced commitments to carbon neutrality, one of biggest controversies is whether Korea can achieve its target of zero carbon by 2050 in the absence of nuclear energy.

Nuclear power plants generate 29.01 percent of the country’s energy, No. 2 after coal.

Not only is nuclear energy considered clean energy, Korea has demonstrated its exceptional skills in nuclear technology through a reactor exported to the United Arab Emirates, which went into commercial production in April.

The Korean Advanced Power Reactor 1400 (APR-1400) in 2019 was certified by the US Nuclear Regulatory Commission (NRC) as it met all safety requirement.

Products from France’s Areva and Japan’s Mitsubishi failed to be certified.

Despite the Korean technology being recognized globally, the Moon government has been phasing out nuclear energy citing safety.

Korea is the only country other than Germany to be gradually reducing its nuclear energy production.

The private sector argues that the Moon government’s energy policy will lead to higher costs while threatening steadily supply.

The Federation of Korean Industries (FKI) notes the country relies heavily on manufacturing, which depends upon low-cost steady energy.

The ratio of manufacturing value-added to the nation’s GDP as of 2018 was 26.6 percent. This is not only higher than the U.S., at 11.3 percent, but other advanced economies including Britain’s 8.8 percent and France’s 9.9 percent.

“The Korean government has been postponing the operation of nuclear plants whose construction has been completed as well as the approval on the construction of new nuclear power plants,” said Yoo Hwan-ik, FKI director on corporate policy. “[The government] should provide tax support on facility investments that will significantly reduce carbon emissions while aggressively utilizing nuclear power plants.”

According to a study by the Korea Institute of Industrial Economics and Trade (KIET), in order to achieve carbon neutrality, greenhouse gas emissions have to be reduced 10 percent every year for the next 30 years.

In the process, the institute estimated manufacturing production to shrink up to 44 percent and 1.34 million jobs lost.

It said for the government to achieve its goal while phasing out nuclear power, it would have to increase the coverage of renewable energy by 80 percent and it would require a minimum investment of 500 trillion won.

“Ninety-five percent of the energy will have to be covered by other sources,” Park said. “This massive amount can’t be fully covered only with wind and solar.”

There have been strong protests against installing renewable energy generators, especially massive wind turbines, with people citing damage to the environment.

Last month, residents of Cheongsapo in Haeundae District, Busan, protested against a windfarm being set up.

The project was to build nine 40 megawatt-offshore windfarms 1.2 to 1.5 kilometers off the coast.

The residents raised concerns about damage to the scenic views, noise and even electromagnetic waves, which could threaten health.

The Korean Federation of Fisheries Industries Association held its own protest in Mokpo, South Jeolla, opposing a bill by a local lawmaker that pushes speedy approval on windfarms.

The association raised concerns about the effects of offshore windfarms on the aquatic environment, which could affect many fish farms.

Another is the increase in used solar panels, which could create another environmental problem. It has been estimated that by 2023, solar panel waste will total 30,000 tons.

There are also questions as to whether hydrogen is environmentally friendly.

Currently hydrogen is extracted from petrochemical and steel plants. In extracting hydrogen, substantial amounts of greenhouse gases are produced.

“The extraction of hydrogen through liquefied natural gas, which is pushed by our government, is costly,” said Park Ji-hye, lawyer for the non-profit organization Solutions For Our Climate. “Additionally, because it emits more greenhouse gas than LNG, it’s a technology that is not preferred globally.”