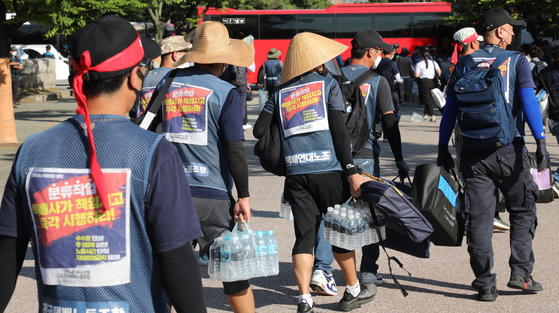 Deliverymen end a two-day sit-in protest in Yeouido, western Seoul, on Wednesday, after coming to an agreement with the logistics companies on improving working conditions.

A delivery strike is coming to an end after workers and logistics companies struck an agreement Wednesday.

Under the terms of the deal, deliverymen will not work more than 60 hours a week or deliver parcels after 9 p.m., though they will not receive the same level of compensation as before when working longer hours.

Logistics companies promised to add additional workers to sort packages. The package sorting part of the agreement will kick in from January 2022, as the companies had asked for a grace period of one year to increase head count.

Deliverymen also said that they should not have to bear any of the costs of adding new workers.

The agreement is reportedly effective Thursday.

Demands for shorter hours and fewer responsibilities gained steam after 16 delivery workers deaths were reported in 2020, though it is not clear weather this is more than should be expected in a group of this size.

The strike started early last week with a few thousand unionized delivery workers. While they were from major logistics companies —CJ Logistics, Lotte Global Logistics, Hanjin Transportation and Logen — not everyone participated in the strike and packages continued to move.

Korea Post, a state-run postal service provider, and its labor union have not been able to reach an agreement.

The union said Korea Post is forcing deliverymen to sort packages at sub terminals and that it won’t be able to reach an agreement with the company unless the issue is resolved.

Around 4,000 deliverymen from different parts of the country gathered in Yeouido, western Seoul, for the negotiations. The workers stayed for two days in Yeouido Park, sleeping in tents.

The city government on Wednesday said it lodged a complaint with the police against the deliverymen for violating the Infectious Disease Control and Prevention Act, saying that large crowds raised pandemic concerns.