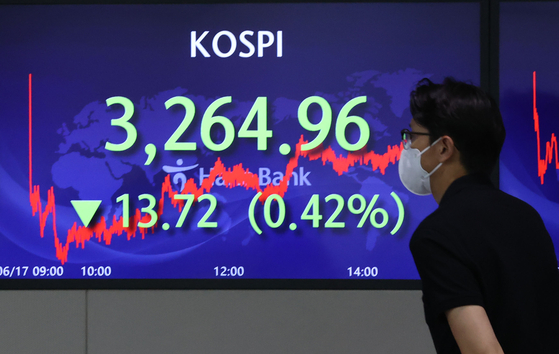 A screen in Hana Bank's trading room in central Seoul shows the Kospi closing at 3,264.96 points on Thursday, down 13.72 points, or 0.42 percent, from the previous trading day. [YONHAP]


Stocks ended a five-session winning streak Thursday as investor appetite for risky assets weakened after the Federal Reserve's comments about an earlier-than-expected timeline for a rate hike. The won fell against the dollar.

Overnight, the Dow Jones Industrial Average fell 0.77 percent, with the Nasdaq Composite and the S&P 500 down 0.24 percent and 0.54 percent, respectively.

"The steeper-than-expected recovery prompted the Fed to start discussing the rate hikes – going a step further from simply scaling back its asset-buying program," she said.

The local currency closed at 1,130.4 won against the dollar, sharply up 13.2 won from the previous session's close on the Fed's strong signal about the faster-than-expected rate hike.