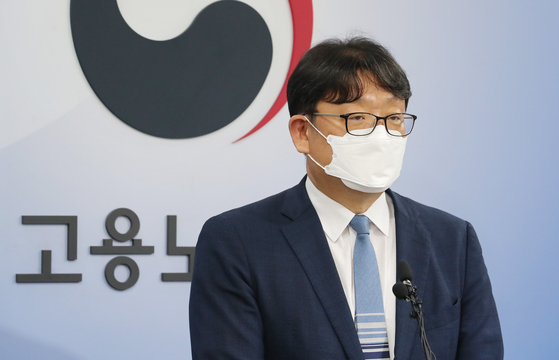 Kwon Ki-seop, the labor ministry's chief of labor policy, holds a press briefing on Wednesday to announce that the 52-hour work week will be enforced at small businesses with five to 49 employees starting July 1. [YONHAP]


Small businesses are not getting a break and will have to enforce the 52-hour workweek from next month.

The Ministry of Employment and Labor said Wednesday that businesses with five to 49 employees will have to follow the law from July 1, rejecting requests for a one-year grace period.

The government also said it is ready for implementation.

“The government implemented many countermeasures, extending the flexible work period from three to six months, implementing the selective working hour system for those in the research and development and easing exceptions that allow employees to work overtime up to 60 hours a week,” said Kwon Ki-seop, the labor ministry's chief of labor policy. “Businesses with five to 29 employees, which account for 95 percent of the small businesses with fewer than 50 employees, can have employees work an extra eight hours a week until end of next year if a formal agreement is reached between the two parties.”

Only small businesses have been denied a grace period.

If businesses are found to violate the mandate, they will be given up to four months to comply with the rules. A fine up to 20 million won ($18,000) or a prison term up to two years will be imposed if the business doesn't follow the 52-hour system after the given period.

Business associations such as the Korea Federation of SMEs (KBIZ) and Korea Enterprises Federation disagree with the decision. In a survey of 207 companies, including shipbuilding, casting and welding businesses, 44 percent said they are not prepared to implement the system.

Around 74 percent of the respondents said they want the government to delay enforcement, and 63 percent said they wanted a grace period. Multiple answers were allowed.

“Many small- and mid-sized firms with fewer than 50 employees can't implement the 52-hour workweek system even if they wanted to," the statement read. "Companies were dealing with the pandemic and didn't have time to reorganize their shift system in preparation for the mandate.”

“Casting and welding businesses that operate their facilities 24 hours a day have to recruit more workers to reschedule their working hours, but they don’t have to ability to do that” said a spokesperson for KBIZ. “With a lack of foreign workers entering Korea due to the pandemic, small businesses are bound to struggle, facing labor shortages if they are forced to cut working hours. We request the government give us a grace period at least until the pandemic calms down.”

In response to industry demands, the ministry will offer various support measures, including consultations to help firms enforce the flexible working-hour system. Small businesses facing labor shortages due to the mandate will be prioritized in being assigned foreign workers who apply for jobs through the labor ministry. The ministry plans to recruit foreign workers from countries where the pandemic has eased. If businesses experience a surge in workload amid the shortage of foreign workers, the ministry plans to temporarily grant a 60-hour workweek exemption.