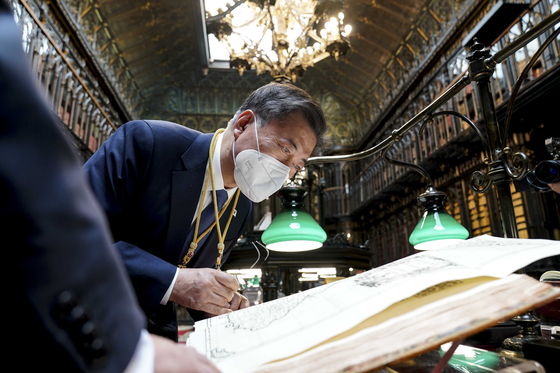 Korean President Moon Jae-in looks at the "Map of Joseon Kingdom" at the Spanish Senate Library in Madrid on Wednesday. [YONHAP]


President Moon Jae-in’s key aides on Thursday blasted Japanese Prime Minister Yoshihide Suga for breaking an arrangement to meet on the sidelines of the Group of Seven (G7) summit, which they branded a political ploy to look good at home.

Rep. Youn Kun-young of the ruling Democratic Party, a longtime aide of Moon, said in an interview with MBC radio that Japan was acting “childishly” and Korea needs to teach it a lesson.

“According to media reports and explanations from government officials of the two countries, [Moon and Suga] had agreed to meet and it is a fact. Japan is not denying it,” Youn said. “But I think Suga intentionally avoided the meeting.

“During a multilateral summit, leaders have pull-aside talks when they leave the summit for a break or coffee,” Youn said. “During the G7 summit, there were about six such occasions. Suga ... intentionally avoided any chance of meeting [Moon].”

Youn, who served in the Moon Blue House as secretary for state affairs planning, is accompanying Moon on his Europe tour. After the G7 summit, Moon visited Austria and Spain.

“Suga appeared to conclude that he has more political gain from bashing Korea than meeting with Moon,” Youn said. “It is a short-sighted thought.”

Last week, Moon and Suga attended the G7 summit in Britain. They only briefly exchanged greetings Saturday, and that was their first meeting since Suga took office last fall. They met a second time briefly at a dinner hosted by British Prime Minister Boris Johnson later that evening.

Korean diplomatic sources said Monday that the two sides had tentatively agreed upon an informal meeting on the sidelines of the summit, but Japan pulled the plug. They said Japan blamed Korea’s annual military drills near Dokdo as the reason.

Suga, however, said later that he didn’t meet with Moon because “promises between countries are not being kept.” Those remarks seemed to refer to a complicated diplomatic dispute over Korea’s demand for compensation for victims of forced labor and wartime sexual slavery. Tokyo maintains that all compensation issues related to Japan’s colonial rule over Korea were resolved through a 1965 treaty normalizing bilateral relations.

“Even though we are upset with Japan and even though Japan acts childishly, we may still need to approach them first for a bigger cause,” he said. “But I think it is necessary for us this time to have a meticulous plan and act boldly to teach Japan a lesson.”

Boycotting the Olympics must be considered, he said. “But this should be the last resort. A sword is most fearful when it is in the sheath.

Lee also said Suga and his ruling party appeared to be suffering at home politically. “I think they keep using us for domestic political purposes,” he said.

“Past is past,” Lee said. “In reality, we are neighbors. I feel unpleasant that Japan keeps talking nonsense and shows a little disrespectful attitude. As I see our diplomats having serious difficulties, I feel fortunate that I am not doing their job.”

Lee left open a possibility that Moon will visit Japan for the Tokyo Olympic Games in July.

Moon and the Blue House have extended olive branches to Japan, as the administration planned to use the Tokyo Olympic Games as an opportunity to create a breakthrough in the frigid inter-Korean relations. The plan, however, was derailed after North Korea announced in April that it won’t attend the games.

Meanwhile, Moon visited the Spanish Senate Library in Madrid during his state visit to Spain and viewed an ancient map that shows Dokdo as part of Korea’s territory.

“This is very valuable historical data that Dokdo is Korea’s territory,” Moon was quoted as saying by his spokeswoman Park Kyung-mee on Wednesday. The "Map of Joseon Kingdom” is part of a set of maps of the Qing Empire produced by French geographer and cartographer Jean-Baptiste Bourguignon d'Anville in the 18th century.

Moon visited the library to see the map amid continuing diplomatic tensions between Korea and Japan over a map on the Tokyo Olympics website that shows Dokdo as part of Japan’s territory.

Korea has maintained a small Coast Guard unit on Dokdo since 1954, proving its effective control of the East Sea islets, but Japan also claims the territory.