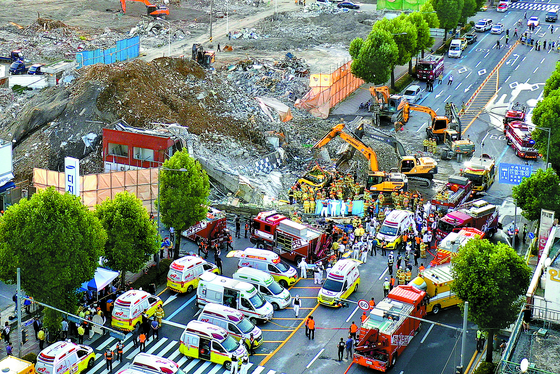 An aerial view of the site of the building collapse in Hak-dong, Dong District of Gwangju on June 9. [JEONG JEONG-PIL]


The man whose company was in charge of the botched demolition of a five-story building in Gwangju, which suddenly collapsed on June 9 and killed nine and seriously injured eight, has fled the country just as he was about to face questioning, police said Wednesday. 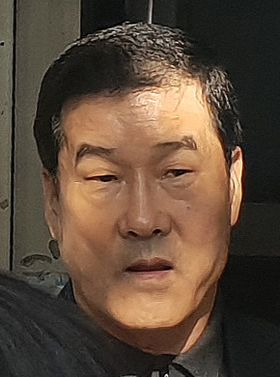 According to the Gwangju Metropolitan Police Agency on June 16, the owner, Moon Heung-sik, departed the country Sunday, the day before police began preparing to request a travel ban from the Justice Ministry.

Police on Monday booked Moon without detention on suspicion of illegal activities in the tender selection process for the demolition contract and interfering in subcontracting for the project.

Police said that they had reason to believe that Moon had engaged in corrupt practices during the tender selection and booked him on Monday, along with seven others involved in the redevelopment project, for professional malpractice and bribery. Seven more people have already been booked for professional negligence resulting in death.

Police are also investigating rumors that Moon previously belonged to a criminal organization before becoming involved in real estate redevelopment in Hak-dong of Dong District, Gwangju, where the building under demolition collapsed. Moon is also suspected of unlawfully interfering in the redevelopment bidding process.

The five-story building was being demolished when it collapsed in the late afternoon of June 9, with much of the debris engulfing a bus stopped at a station in front of the construction site.

The Blue House ordered the police and the Land Ministry to conduct investigations into the accident, particularly to check whether safety regulations were ignored during the demolition.

The day after the accident, President Moon Jae-in expressed frustration that safety measures instituted after a similar accident in 2019 failed to prevent the disaster this time. In 2019, a building in Jamwon-dong, Seocho District, of southern Seoul collapsed while it was being demolished, killing one person and injuring three.

According to the Hak-dong District Office of Gwangju, the building collapsed on the first day of the demolition project. A document submitted to the district office showed that the construction company planned to use excavators to tear down the building starting from the fifth floor using a top-down demolition method.

Cho Hyeon-gi, an official from the district office, said Thursday that the construction company is suspected of not following the steps in the demolition plan.

Instead of tearing down the building from the top floor, photos taken on the day of the accident showed that construction workers demolished several floors simultaneously, weakening the load-bearing structures, the experts said.