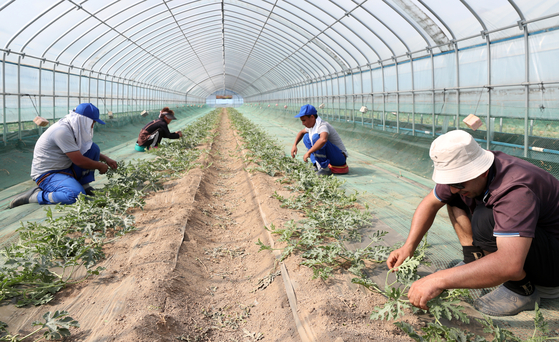 Uzbek migrant workers work at a watermelon farm in Yanggu County, Gangwon, on May 14. They are part of the first group of seasonal migrant workers who entered Korea this year to work across farms. [YONHAP]


A total of 112 Uzbekistanis entered Korea a week ago to work across farms in Yeongyang County, North Gyeongsang, the county office announced Thursday.

The Uzbeks came through an official program organized by the government to legally work in Korea as seasonal migrant workers.

Since 2015, the Ministry of Justice has been coordinating between local governments and foreign laborers to help migrant workers enter Korea to work during harvest season across farmlands. They are allowed entry for labor at farms for a few months at a time.

The drop in Korea's rural population, coupled with the rapidly aging rural population that remains, has for years forced the country to turn to foreign hands to meet the demands of labor on farms. According to records at the Korean government, the number of farmers dropped from 3.11 million in 2009 to 2.2 million in 2019. The proportion of people aged over 65 in rural areas hiked from around 9 percent in 1990 to 44.7 percent in 2018, according to Statistics Korea.

The number of seasonal migrant workers brought in by the government to work in farms in Korea has grown from 19 in 2015 to around 3,500 in 2019, according to the Ministry of Justice.

The Covid-19 pandemic last year had shut down the program, but it has been relaunched recently with a total of 4,631 foreign workers designated to work across farms in 37 cities and counties this year, according to the Justice Ministry. So far, apart from the 112 newly arrived Uzbeks, another group of 63 Uzbeks arrived last month to work across 32 farms in Yanggu County in Gangwon.

The 112 Uzbeks will be working mostly on some 40 chili pepper farms in Yeongyang County, which is where most locally-produced chili peppers come from in Korea. The county holds some 1,300 hectares of farms just for chili peppers. Each worker will be paid around 100,000 won ($89) per day and stay in the country for a total of 150 days.

The newest group is currently undergoing quarantine in Incheon for the mandatory 14-day quarantine upon arrival in Korea — something that the city government of Incheon has not taken kindly.

The Incheon city government reportedly complained to the Yeongyang County Office about why the migrant workers were kept in quarantine in Incheon, instead of in the county.

"The city government called us several times to complain,” a county official told the JoongAng Ilbo. “We apologized to the city government [regarding the decision]. But to be frank, there aren't many places in the county where we can quarantine a large number of people at once.”