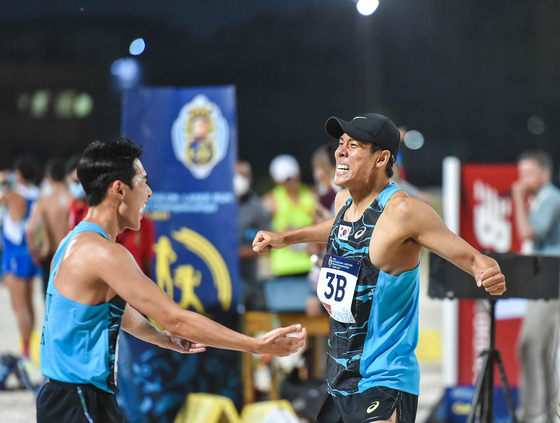 Jung Jin-hwa and Jun woong-tae have earned the right to represent Korea in the men's event, while Kim Se-hee and Kim Sun-woo will compete in the women's pentathlon.

Team Korea was first represented in the event by Choi Kui-seung at the 1964 Tokyo Games. Korea has since participated in eight Olympics, but is yet to earn a medal.

Modern pentathlon was first featured in the 1912 Stockholm Summer Games, but with the individual men's event. The women's event was added at the 2000 Sydney Olympics.

Kim Se-hee earned her Olympic berth when she won the Asia & Oceania Championships title in November 2019 in Wuhan, China.

She goes into the Games on a high note, having just won gold in the mixed team relay at the Union Internationale de Pentathlon world championships alongside Seo Chang-wan on Monday in Cairo, Egypt. Seo did qualify for the Olympics but will not go to the Games because one country can only enter two athletes per gender.

Jun and Jung earned their berths at the Cairo world championships, winning silver in the men's team relay on June 9. As the Olympics do not have a team event, they will be competing in the men's individual events. 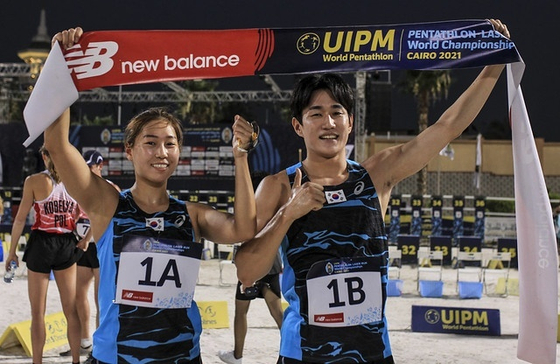 Kim Se-hee, left and Seo Chang-wan took home gold in the pentathlon mixed team relay on the final day of the International Modern Pentathlon Union World Pentathlon and Laser Run Championships in Cairo on Monday. The duo topped the leaderboard with 1,432 points. [NEWS1]

The five skills were considered the core skills a cavalry officer needed. As it developed into a sports event, the five disciplines were believed to produce the ideal athlete as it tested not only physical skills but also mental and moral qualities.

Olympic pentathletes carry on the spirit competing in the five disciplines: Fencing, swimming, horseback riding and laser-run, a combination of shooting and cross country running.

The first three sports determine who will start first in the laser-run round where the first to cross the finish line wins.

The first day is dedicated to the fencing round robin as it is the most physically challenging.

Pentathletes compete with the epee — the longest and heaviest of the three kinds of fencing swords —which is used to thrust toward the opponent's entire body.

All fencers face each other in the round robin. Unlike Olympic fencing, each match is a minute long, double hits do not count and the first to hit wins instantly.

Athletes then swim a 200-meter freestyle race and points are given based on their finishing time.

Another fencing bonus round comes next, done in an elimination format based on the results of the first round-robin.

The bottom two from the round robin play each other in a shorter 30 second bout and the fencer who scores first instantly wins the match, staying on the piste to face the next fencer. Points are given based on the number of wins in the round.

Athletes go on to ride an unfamiliar horse on a show jumping course, trying not to incur penalties. In order to level the playing field, athletes only get to spend 20 minutes with the horse prior to the event.

Finally, the laser-run is a combination of cross country and 10-meter air pistol. Pentathletes repeat the process, running 800 meters on an unfamiliar cross country course and shooting a laser gun towards a 59.5 millimeter target, running a total of 3.2 kilometers and shooting three times. The first to reach the finish line is the winner.