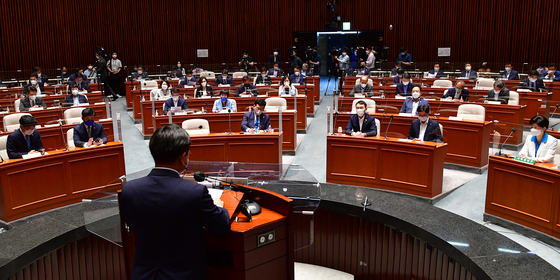 
The Democratic Party (DP) is pushing for broader exemptions on some property taxes.

After the loss of mayoral elections in Seoul and Busan in April, the party realized it must do better in terms of the real estate market.

The DP lawmakers “overwhelmingly voted in favor of two proposals,” said Koh Yong-jin, DP spokesperson, on Friday, in discussing a party meeting where the vote was taken.

The first proposal is exempting sales for properties under 1.2 billion won from capital gains taxes, from the current 900 million won.

The exemption is only applied to those who own a single apartment, and they have to meet several requirements.

The apartment has to be owned for minimum two years, and for apartments purchased since August 2017 and located in areas designated by the government as overheated or speculative, which includes all of Seoul, the apartment owner has to have lived in the apartment for a minimum of two years.

The median value of apartments in Seoul as of April, according to KB Kookmin Bank, was 1.1 billion won.

The second proposal is to only impose the comprehensive real estate tax on the top 2 percent of properties by government assessed values.

Currently in the case of single apartments, the comprehensive real estate tax, which is a national tax separate from the property tax imposed by the local governments, applies to any property with an assessed value above 900 million won.
For multiple home owners, the comprehensive real estate tax is applied when the combined assessed value exceeds 600 million won.

The public has been frustrated with the government’s and the ruling party’s real estate policies.

The DP’s three tenant protection laws, included automatic extensions of jeonse and a limit on price increases, only added to the scarcity of affordable apartments.

The sharp increase in assessed values, which translated to higher taxes, further fueled the anger of homeowners.

The average national assessed value rose 19.08 percent this year. It is the fastest increase in 14 years and is up from 2020’s 5.99 percent.

The last time it grew at this rate was in 2007, the second year the real estate tax was applied. At the time, it rose 22.73 percent.

During a press conference at the Blue House in May, President Moon said his biggest failure so far has been the real estate policy.

Parties reach agreement on property bill but fail to finalize