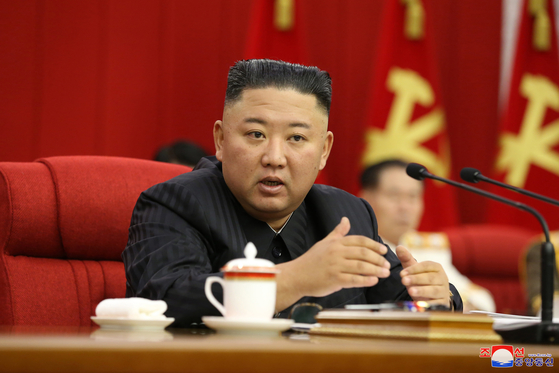 North Korean leader Kim Jong-un at the 3rd Plenary Meeting of the 8th Central Committee of Workers' Party of Korea on Thursday. [YONHAP]


North Korean leader Kim Jong-un stressed the need to prepare for both dialogue and confrontation with the United States during his address of the Workers’ Party Thursday.

“[Kim] stressed the need to get prepared for both dialogue and confrontation, especially to get fully prepared for confrontation in order to protect the dignity of our state and its interests for independent development and to reliably guarantee the peaceful environment and the security of our state,” reported the Korean Central News Agency (KCNA), the North’s state news agency, following the 3rd Plenary Meeting of the 8th Central Committee of the party on Thursday.

According to the report, Kim gave a “detailed analysis” of the Biden administration’s North Korea policy, providing direction on how the North should address them “in the days to come.”

The statement comes around the same time as the visit of U.S. Special Representative for North Korea Sung Kim to Seoul, who will meet with his counterparts in Korea and Japan for trilateral talks to coordinate their North Korea policies from Saturday to Wednesday.

Kim is also expected to discuss with his counterparts about the United States’ recently completed review of its North Korea policy.

Some experts have read the recent message from Kim Jong-un as conciliatory towards dialogue with the United States.

“Compared to the previous messages that Kim has sent to the United States, this recent message is rather moderate,” said Hong Min, researcher at the Korea Institute for National Unification. “The North may not show up to the dialogue table immediately, but it is sending a signal that it is ready to talk, and actually sending a signal to the United States to create the means for the two to engage in dialogue.”

North Korea has its own domestic issues to deal with in the meantime. The country appears to be facing some of its worst food shortages in years. Kim in a party meeting earlier in the week had designated the food shortage in the country as “a top priority,” according to KCNA.

The UN Food and Agricultural Organization released a report earlier this month warning that the North could experience a “harsh lean period” from August to October this year without external food assistance into the North.

“The North has the economic struggles and food shortages to address for now, and these are issues that it will focus on in the near future,” said Kim Hong-kyun, former South Korean special representative for Korean Peninsula Peace and Security Affairs. “It seems that North Korea has not yet made a specific decision on whether or how to pursue a dialogue with the United States, so it appears to have taken a rather neutral and unclear position.”