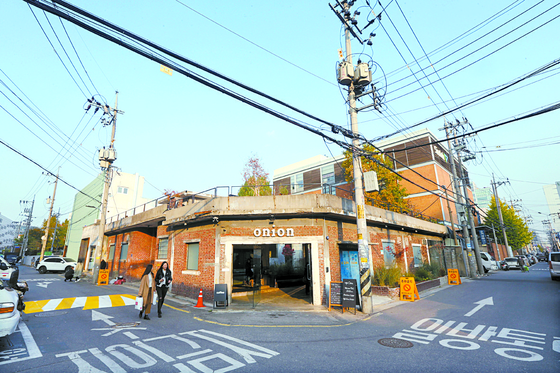 Cafe Onion, a bakery cafe located in Seongsu-dong, Seongdong District in eastern Seoul. The cafe renovated a factory built in 1970 to look like a modern hanok, or traditional Korean house. [JOONGANG DB]


Seongsu-dong is taking Garosu-gil's title of the trendy fashion district, with other neighborhoods north of the Han River following suit.

“There are many unique places in Seongsu-dong — in front of a cafe that looks like a factory, there’s a special store that sells French chestnut spreads while an old handcart rattles by,” said Kim Yeon-su, a 36-year-old who often visits the neighborhood with her friends.

“You can find a lot of joggers there because it’s close to Seoul Forest and the Han River. It's refreshing to see people walk by with picnic mats in their hands rather than expensive handbags. Parking is a bit difficult because there are a lot of small alleyways, but it almost feels like a special trip around Seoul.”

Gangnam District in southern Seoul was commonly known as the hub for trend-setters and fashionistas, but neighborhoods north of the river have been taking over the spotlight as of late. Gangnam's Apgujeong, Cheongdam, and Garosu-gil areas are still home to many luxury brands such as Chanel, Louis Vuitton and Hermes, but everyday lifestyle trends are sprouting from Seongsu-dong, Hannam-dong, Hapjeong and Euljiro, all in districts north of the Han River.

According to data analysis company Tapa Cross, when looking at how much social media buzz the two areas got on Twitter, Instagram, Naver Blog and online community websites last year, Garosu-gil was mentioned 376,520 times last year, down 13.2 percent on year. Seongsu-dong was mentioned 489,762 times during the same period, up 2.9 percent.

Koreans had a different perception of the two neighborhoods.

On social media, the term “Garosu-gil” was closely associated with descriptive words that translate to “professional,” “luxurious,” “classy,” “big” and “popular.” For Seongsu-dong, words such as “unique,” “vintage” and “unconventional” were often used.

Social media posts of both areas were highly associated with words such as “cafe” and “must-eat places.” Aside from that, they saw different results. Garosu-gil’s associative keywords included “shopping,” “hair salon” and “nail [salon],” while “date night,” “party” and “brunch” were Seongsu-dong’s top keywords.

“Garosu-gil is a place where people visit with a set purpose, such as shopping or visiting hair salons, while Seongsu-dong tends to be a place where people meet up and spend time together” said Jeong Hye-ji, a data analyst at Tapa Cross. “There are a lot of retro-looking stores that are remodeled from old factories and houses and experiential stores that young Koreans like, making Seongsu-dong attractive.”

While stores in Gangnam are more fashion-heavy, Gangbuk districts north of the river attract passersby with its wider variety of establishments. Visitors can eat, drink, go see an exhibition and shop for home decor all at once.

The district isn’t only seeing an increase in visitors, but it's starting to host more trendy companies as well.

High-end fashion brands are also venturing out of the Gangnam area and into the other hip neighborhoods, especially Hannam-dong.

Gucci, a brand known for keeping its stores around Gangnam District, opened Gucci Gaok at Hannam-dong of Yongsan District in central Seoul in May. Gucci Gaok is located in “Comme des Garcons street,” a nickname given to the area after the Japanese fashion label opened its store in the neighborhood, along with other fashion and beauty stores such as Theory, Beaker, COS, Aesop, Caudalie and Le Labo.

With Gucci stepping onto land north of the river, many say other luxury brands will follow. 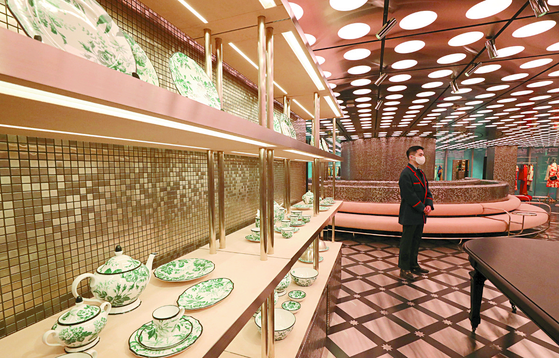 
“Gangnam District is known to be luxurious, but lacks cultural appeal,” said Lee Kee-woong, a sociology professor at Sungkonghoe University. “Young Koreans don’t want to follow mass appeal, but want to develop their own interest, which makes them turn to Gangbuk District.”

“Online shopping is common nowadays, and offline stores need to serve more than simple purchasing purposes — they have to offer an enjoyable experience for customers,” said Park Tae-joon, a retail team lead at Samsung C&T. “Gangnam isn’t effective at doing that because their buildings are generic-looking, while Gangbuk District’s old and unique buildings have an advantage.”

Park added that young Koreans are keen to upload Instagram-worthy photos on social media, which also increases the popularity of stores in north of Gangnam.

“Gangnam District is a financially developed neighborhood, home to conglomerates and start-ups, but has lost its charm in terms of cultural appeal,” said Mo Jong-ryn, author of “Alleyway Capitalism” and professor of international political economy at Yonsei University.

“Creative industries such as fashion and entertainment companies are moving north of the river, which means that people's interests have already shifted. Culture can exert a heavy influence on a sluggish economy, and places where creative industries turn to is where the future lies.”