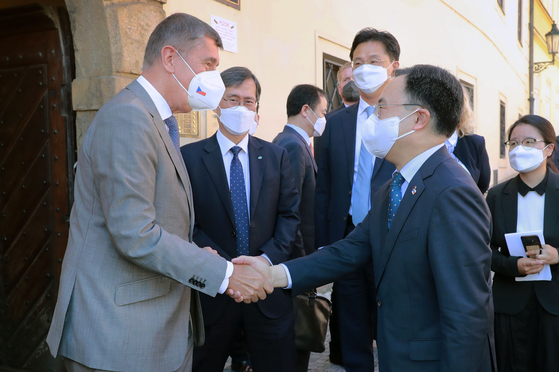 
Korea's trade minister met with the leader of the Czech Republic in Prague Friday in a bid to win a nuclear power plant project estimated to be worth $7 billion.

Minister of Trade, Industry and Energy Moon Sung-wook met with Prime Minister Andrej Babis Friday and told him Korea was the best possible partner for the project.

“While nuclear plant construction is often delayed, Korea not only met its construction schedule for the nuclear reactor in the UAE but came in under the planned budget,” Moon said.

Moon noted that Korea has built 26 nuclear plants in Korea and one overseas.

He emphasized that if Korea wins the project, the budget will not exceed its initial amount.

“A good result will be seen if Korea’s expertise in nuclear reactors is combined with Czech manufacturing skills,” Moon said.

Babis, according to the Korean government, hinted that the odds were in Korea's favor for the deal, emphasizing that no security threat would be involved.

China was excluded from bidding in January and Russia suffered the same fate in April.

In addition to Korea, the U.S. and France are competing for the project.

Also seven memoranda of understanding (MOUs) were signed between Korean and Czech companies including between Doosan Heavy Industries & Construction and I&C Energo as well as Daewoo E&C and Baucome Hilti.

While the Korean government has implemented a policy that would reduce the its own dependence on nuclear power since 2017, it is still trying to export Korean nuclear power reactor technology.