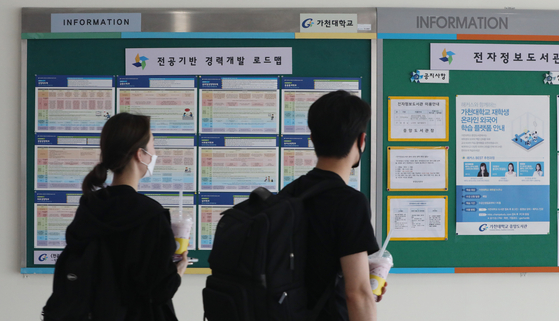 It’s tough finding a job in Korea, and the market is especially challenging for recent graduates and other people just starting their careers.

Not only small- and mid-sized companies, but also large companies are reducing the number of new hires. Even when they have plans to hire, they look for people who already have working experiences instead of recent graduates.

A 32-year-old man recently stopped looking for a job. Instead, he has started to study for the civil service exam to become an agriculture insurance claim adjuster.

Agriculture insurance claim adjusters inspect fields on which claims have been filed. It is a popular job for old people.

Kim said it was the last choice for him as it has become too difficult to get a job for college graduates, especially after the Covid-19 outbreak.

“I heard that the job is what many old people choose to do after retirement,” Kim said. “But I can’t waste time waiting for companies to post job openings, so I started studying for the exam recently.”

According to the Korea Employment Information Service, of top 500 companies in Korea in terms of sales, only 137 hired new employees in the second quarter of the year. Of them, only 62.4 percent hired university graduates while 37.6 percent hired experienced workers.

In a recent poll conducted by job search website Saramin on 330 companies, roughly 53.3 percent said they prefer job applicants who have work experience over recent graduates. 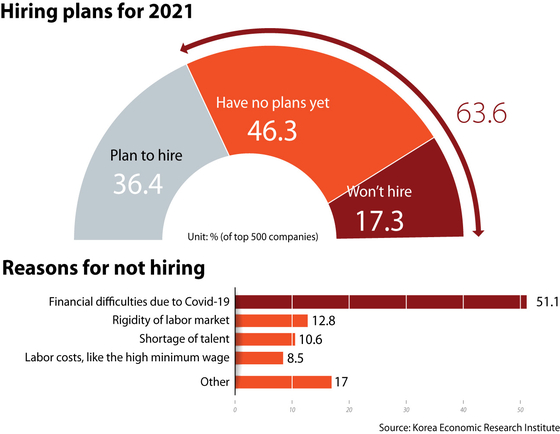 When they were asked why they prefer experienced workers, around 73.9 percent said they need employees “who can start work right away.” Multiple answers were allowed.

More companies are now abandoning their open recruitment process, which is also a big factor driving college graduates over the edge.

But more companies are now abandoning the system as they can’t hire so many people at a time, and the system itself cost lots of money.

Of the five largest groups in Korea, Samsung is the only one still hiring new employees through the open recruitment process.

According to the Korea Economic Research Institute, 38.2 percent of top 500 companies in Korea said they will not proceed the open recruitment.

“Abandoning open recruitment system means that companies will just hire people when they are needed,” said a spokesperson for the Korea Employment Information Service. “This definitely will lead to a decline in the number of new hires in the future.”

There were a total of 890,000 job seekers in May, up 8.5 percent from the previous month, according to Statistics Korea. That’s the highest monthly figure since the statistics agency started compiling the related data in 2003.

“Due to the rigidity in Korea’s labor market, it’s not easy for young people who start with unsatisfactory jobs to move to quality jobs later,” said professor Kang Sung-jin, who teaches economics at Korea University. “So young people prepare longer to get a quality job in the first place.”

Even getting a part-time job is not an easy option.

“For transparency and fairness, we revealed the whole process of the draw to the public,” said a spokesperson for Asan city government. “As our part-time jobs allow students to work during the summer vacation, they gained lots of attention.”

On online communities for university students, there are many postings written by students suffering to find part-time jobs, and even considering construction work.

“It took me more than three months to get a part-time job at a convenience store,” said a sophomore who goes to a university in Gyeonggi. “I wrote dozens of applications, but this was the only one place that accepted me.”

Experts say it is time for the Korean government to restructure and improve youth employment policies.

“Youth unemployment is getting worse due to some structural issues like rigidity in the labor market that does not give opportunities to unexperienced job seekers, as well as the minimum wage issue,” said Sung Tae-yoon, an economics professor at Yonsei University. “Part-time jobs in public institutions only have short-term effects.”

“The government said it will invest 6 trillion won [$5.3 billion] in youth employment,” Kim said. “But it should not focus on increasing the number of public job positions, but must invest in more education and training for young people.”