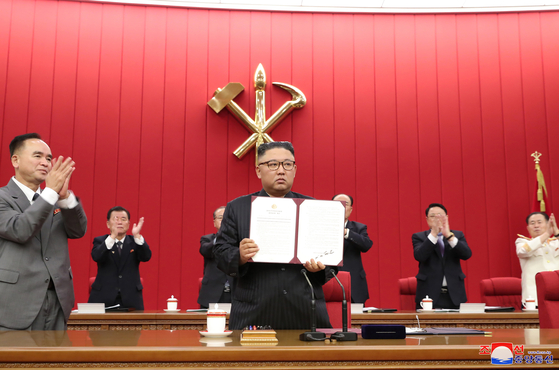 North Korean leader Kim Jong-un holds up a document signed by him to applause from participants in the third plenary session of the eighth Central Committee of the North’s ruling Workers' Party Thursday, reported its official Korean Central News Agency Friday. The document is thought to be a special order signed off by Kim during the meeting which could address issues like food shortage. [YONHAP]


North Korean leader Kim Jong-un made a rare acknowledgement of a food shortage in his country during a four-day ruling Workers' Party meeting last week and issued a special order Thursday to improve people's livelihood.

Analysts speculated that the special order, though its details were not revealed by North Korea's state media, could include measures to alleviate shortages, such as releasing wartime food stockpiles.

Kim presided over a third plenary session of the eighth Central Committee of the North's ruling Workers' Party, which ran from last Tuesday to Friday, discussing issues including economic challenges, efforts to fight the pandemic and policy for dealing with the Joe Biden administration in Washington.

On the first day of the meeting, Kim made the unusual move of confessing publicly to food shortages.

"The people's food situation is now getting tense as the agricultural sector failed to fulfill its grain production plan due to the damage by typhoon last year," Kim told the meeting Tuesday, according to an English-language report by the Korean Central News Agency (KCNA). He added that the meeting should come up with a "positive measure" to settle the problem.

On Friday, North Korean official media released a photograph of Kim holding up a special order that he had signed. It is rare for such a special order to be revealed, although North Korea has revealed documents signed by Kim such as the authorization of missile launches before.

Some 600 participants in the meeting, including members of the Central Committee, gave Kim a standing ovation.

The KCNA reported that Kim had issued a special order "to contribute even a little to the stability of the people's livelihood."

However, it did not disclose the specific contents of the special order.

The Institute for National Security Strategy (INSS), a Seoul-based government-funded think tank, suggested that Kim "may have signed a special order to supply the North Korean people with wartime food supplies."

Such an order could mean that Kim had ordered the opening of the "No. 2 warehouse," which stores military food supplies such as rice for times of war.

In a report analyzing the meeting, the INSS said after the Workers' Party's Central Military Commission held a discussion on the supply of wartime food stockpile on June 11, a decision was made at the plenary meeting on Thursday and that a special order to supply the food was signed by Kim.

"North Korea stockpiles a significant amount of its food production as military provisions," said a high-ranking North Korean defector who asked not to be named. "Occasionally, it used to release old military rice to the public and replenish it, but this time, it seems that they are going to release military rice publicly and replenish during the fall harvest season in a public manner."

The INSS report also raised the possibility of high-level exchanges between Pyongyang and Beijing and a request for food aid from China next month coinciding with the renewal of the Sino-North Korean Mutual Aid and Cooperation Friendship Treaty signed on July 11, 1961.

The Food and Agriculture Organization of the United Nations (FAO) estimated recently that North Korea is short of about 860,000 tons of food, or enough for just over two months of supplies.

The FAO in a report last week warned that if the gap in supplies is not covered through imports or food aid, North Koreans "households could experience a harsh lean period between August and October 2021."

The Korean Peninsula was hit by a series of typhoons last year including Typhoon Hagupit in August.

According to a report by the South's state-run Korea Development Institute (KDI) earlier this month, North Korea is expected to face a food shortage of about 1.35 million tons this year, affected by last summer's typhoons, flooding and a lack of farming inputs.

The North is estimated to need at least 5.75 million tons of food annually to feed its population, according to the KDI, which said that it produced around about 4.4 million tons of grains last year.

North Korea usually holds a plenary meeting of the Central Committee once or twice a year, but this year marks the third such meeting after ones in January and February.