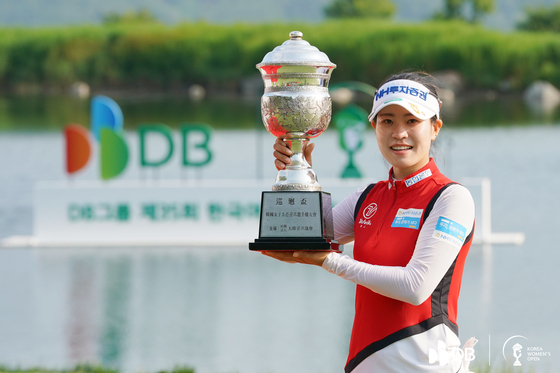 Park has now won half of the 10 events on the KLPGA Tour this year, taking the two most recent wins on consecutive weekends.

This year's addition of the Korea Women's Open was played at Rainbow Hills, a notoriously difficult course filled with water hazards and high tees that offer little visibility.

The course is so notoriously difficult that 10 tee shots on the par-4 12th went straight into the water on the final day alone. Hong Ran, who hit 1,000 KLPGA rounds over the weekend, didn't even make the cut.

"The course is extremely difficult and hard to play," said Hong after the second round. "There are holes where golfers must have a long driving distance, which is where I ran up against my limit."

But while Hong struggled to make an impact, Park Min-ji and Park Hyun-kyung repeated their performance a week earlier at the Celltrion Open, taking the top two spots and fighting to make it into the winner's circle until the very end.

Park Min-ji started the final round on top at 15-under-par, while Park Hyun-kyung trailed at 14-under. Lee Jung min was third with eight-under.

"I really want to win because there are only 18 holes left and I'm first" Park Min-ji said after her third round.

But she bogied twice on the par-3 third and par-4 fourth, briefly giving the lead to Park Hyun-kyung. Park Min-ji took the lead back again with three birdies on the sixth, seventh and eighth, but after the first nine holes, the two golfers were tied at first.

Park Hyun-kyung tied the score on the par-3 11th, as her iron shot landed right next to the pin, giving her a birdie while Park Min-ji parred.

The game leveled out once again on the par-5 16th as Park Min-ji bogied and Park Hyun-kyung managed a par.

Both hit par on the par-4, 17th, sending them into the final hole tied.

As soon as Park Hyun-kyung made her driver shot it was clear things hadn't gone to plan. Her head dropped as she watched the ball and she was left reaching for her iron to hit out of the rough.

After watching her rival take the shot, Park Min-ji appeared to take a chance and shoot right toward the hole, landing just in front of the pin to essentially guarantee her victory.

"It was actually a mistake" Park revealed in her victory interview, "I shot for the tower on the right, but the ball curved left and instead headed close to the hole."

Intentional or not, Park Min-ji birdied her last hole to take the national title.

Park's fifth win comes in the middle of a phenomenal season.

She picked up her first win in April at the Nexen Saint Nine Masters 2021 and her second at the 2021 NH Investment & Securities Ladies Championship. Park's third win came a week after her second, at the Doosan Match Play Championship.

Her fourth win came at the Celltrion Queens Masters Open, after she sat out the Lotte Open to rest.

The Korea Women's Open is the second of five major events on the Tour this season, following the Creas F&C KLPGA Championship in April, where Park Hyun-kyung won her season first victory. The three other major events are the Hanwha Classic in August, the KB Financial Group STAR Championship in September and The 21st Hite Jinro Championship in October.

This is the first time that DB Group has sponsored the tournament.

The KLPGA Tour continues with the BC Card Hankyung Ladies Cup 2021 at Fortune Hills Country Club in Pocheon, Gyeonggi, from June 24 to 27.