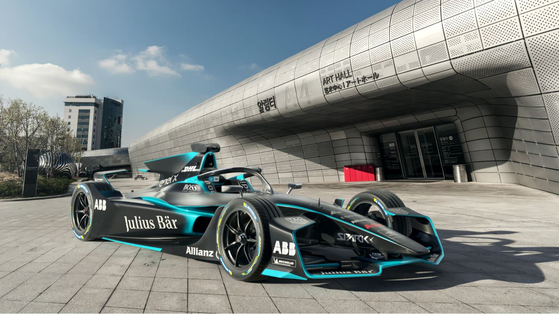 A Formula E car is parked outside Dongdaemun Design Plaza in central Seoul in this file photo from 2018. [FORMULA E SEOUL ORGANIZING COMMITTEE]


The ABB FIA Formula E World Championship will make its first stop on the streets of Seoul next year, two years after it was originally meant to debut here.

The Formula E electric motor racing series will take to the streets of Jamsil, southern Seoul on Aug. 13 and Aug. 14 next year, Seoul city government said Friday. The race, the final event of the 2021-22 Formula E season, will be held on the streets around the Jamsil Stadium complex.

Formula E is a motorsport championship that uses only electric vehicles. The tournament was launched in 2014 and officially became a Fédération Internationale de l'Automobile world championship in 2020, alongside other leading motorsports circuits including Formula One and the World Rally Championship.

Unlike Formula One, Formula E racers all drive variants of the same car, currently known as the Gen2, updated with different powertrains.

Formula E was originally supposed to arrive in Jamsil on May 2 last year. That race was canceled due to the Covid-19 pandemic and instead held on a circuit in Berlin.

The 19-turn 2.8-kilometer (1.74 mile) course is predominantly within the Jamsil Sports Complex, home of the 1988 Seoul Olympics, with two long stretches on Olympic Road and Baekjegobun Road, which run down two sides of the park.

The course starts on Olympic Road, loops up past Jamsil Baseball Stadium, home of the Doosan Bears and LG Twins, and into the Olympic Stadium. After circling the inside of the Olympic Stadium, racers circle around between Jamsil Arena and Jamsil Indoor Swimming Pool, before reaching Baekjegobun Road.

A straight stretch down Baekjegobun Road leads into a hard right, which takes the cars back to the start on Olympic Road.

A longer street race was originally proposed for the Seoul ePrix, possibly around Gwanghwamun in central Seoul, but feasibility studies pushed organizers to the Jamsil route, which is significantly less disruptive.

The Seoul government is also planning to hold a Seoul festival at the same time as the 2022 race, hoping that the combination of both events can help boost tourism to the city.

Seoul is set to host the race annually until at least 2025.