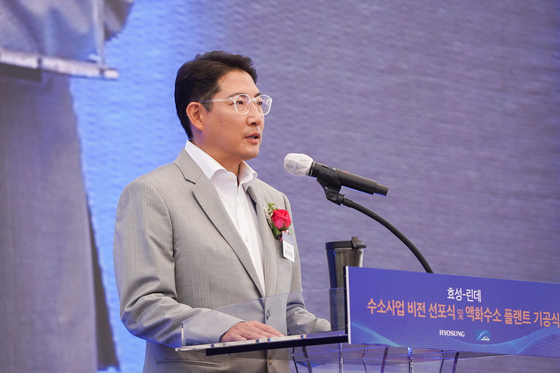 Hyosung Heavy Industries will invest 1 trillion won ($883 million) in a liquefied hydrogen plant in Ulsan, and wants to make it the largest factory of its kind.

On Monday, Hyosung Heavy Industries and Linde Korea, the regional unit of the Ireland-based chemical company, held a groundbreaking event for a big liquefied hydrogen plant in Ulsan.

Hyosung Heavy Industries wants to expand the factory’s annual capacity to 39,000 tons per year. The company did not cite a fixed deadline, saying it is a long-term goal.

Liquefied hydrogen is much more cost-efficient to store and transport, as its volume is one-800th its natural gas form. Another advantage is that it can be used to charge faster, especially large vehicles like buses or trucks.

“We will lead that paradigm shift through continuous investments. Hyosung’s early days trace back to Ulsan. I’m glad our new chapter for the next century starts here.”

Linde Hydrogen Energy will take charge of producing liquefied hydrogen production and operate the Ulsan factory. Hyosung Hydrogen will oversee marketing of the factory’s output, including the installation of liquefied hydrogen charging stations in Korea.

In July 2020, the Korean government announced the goal of more than 1,200 hydrogen chargers in the country by 2030.

At the moment, Korea has around 50 hydrogen chargers nationwide for hydrogen-powered vehicles. Hyosung Heavy Industries is the largest operator in the country with 18 chargers, equivalent to 35 percent.

Apart from the Ulsan factory, Hyosung Group announced other big business initiatives that involves hydrogen during the groundbreaking event.

With Linde, Hyosung will develop technologies for making equipment for collecting and liquefying carbon dioxide that’s naturally produced in industries like petrochemicals and oil refineries. The Korean company will also push efforts to build equipment for “green” hydrogen, which refers to hydrogen made with renewable energy sources like solar and wind power.