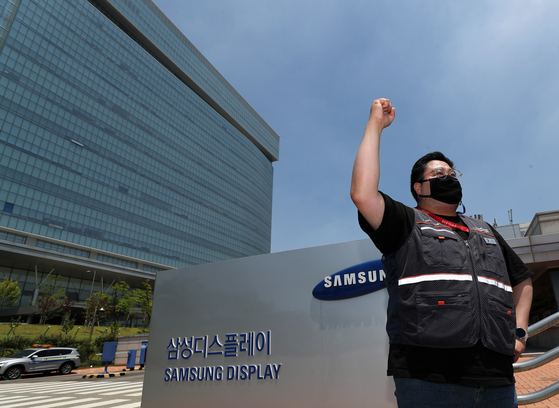 This is also the first strike at a Samsung Group affiliate since Samsung Electronics Vice Chairman Lee Jae-yong announced in May 2020 that the group would no longer discourage union activities.

The union and management have clashed on salaries since earlier this year. The labor union has proposed a 6.8 percent hike in their basic wage this year, based on 2020's robust performance.

Samsung Display generated 1.8 trillion won ($1.6 billion) in net profit last year, a 4.4 times increase over the year before. Revenues were about the same at 27 trillion won.

Management is sticking to a 4.5 percent raise decided on by a labor-management council in April. The council negotiates between employees and the company without union participation.

“We’re not in this fight for the 2.3-percentage-point gap -- we’re in it because the management’s ways are not transparent and unfair,” the union said in a statement.

“Since we started wage discussions this year, the company has shown devastatingly poor cooperation in providing documents. They’re not willing to engage in fair bargaining grounded on data.”

The union says that of more 50 documents it has requested, the company only provided seven.

In May, the head of the union head and Samsung Display's CEO had a one-on-one meeting but failed to come to terms. In a vote held that month, 71.8 percent of the union’s members voted for Monday's strike.

The union said it is still “open for discussions if management suggests a new negotiation plan.” It will continue the strike until an agreement is struck.

The display maker’s union was established in February 2020. It was the third Samsung affiliate to get a union after Samsung Electronics and Samsung Fire & Marine Insurance.

Around 10 percent of Samsung Display employees have joined the union, equivalent to more than 2,400.