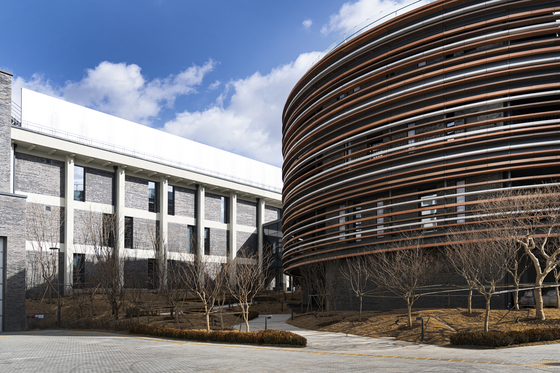 
The Seoul Museum of Craft Art in Jongno District, central Seoul, Korea's first museum specialized in expert handicraft, originally planned to open its doors in September of 2018, but was hit by a series of delays.

Its opening date has now been finalized as July 15. Ahead of that launch, the museum opened its gallery at a press conference on June 16. 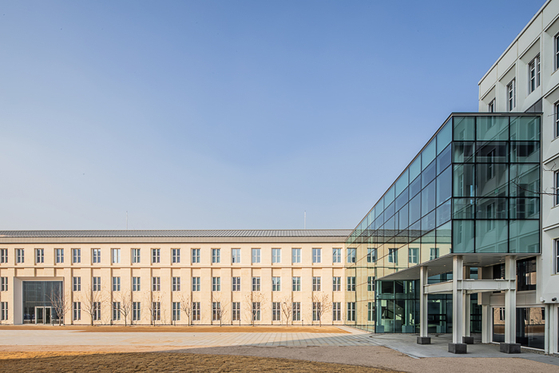 
Nine selected artisans were commissioned to create artwork to decorate the vast museum under a project dubbed “Objects9.”

Over the span of a year, the artists used various materials and techniques in their respective fields to create artwork that aesthetically complements the museum. Since most of the works serve practical functions as well, the artisans had to consider practicality and artistic value at the same time, without even knowing what the completed museum would look like.

“When the artists were commissioned, construction was far from finished,” said Director Kim Jung-hwa of the museum. “The site was a mostly empty field with some demolished buildings. The artisans had to use their imagination to envision how the museum and their works would look together. It was a challenging task but they did such a great job creating artwork that suits the museum so well.”

The works have now been placed throughout the museum, indoors and outdoors. 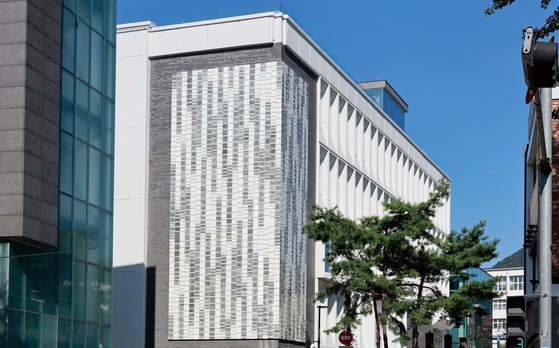 
One of the museum’s many entrances is right around the corner from Anguk Station's exit 1.

Ceramic artist Kang Suk-young decorated that side of the museum’s exterior wall with approximately 4,000 ceramic tiles inspired by traditional colors and textures including white porcelain from the Joseon Dynasty (1392-1910), celadon from the Goryeo Dynasty (918-1392) and Buncheong ware, a traditional grayish-blue powdered celadon. It serves as the “first impression” of the museum for visitors coming from Anguk Station.

“I didn’t want the ceramics to stand out too much,” said Kang. “Some might even pass by thinking it’s an ordinary wall. I wanted the tiles to blend with the building.” 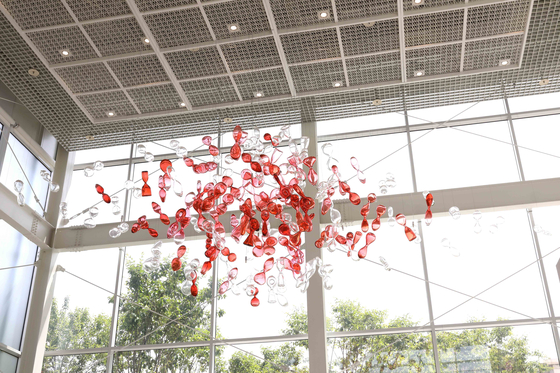 “I didn’t add sand to the hourglasses because I wanted visitors to look at it and use their own imagination,” said the artist. “Whatever memory or thoughts they have while looking at this, the time they spend thinking is the metaphorical sand.”

The site of the museum was previously the former campus of Poongmoon Girls' High School, which relocated to Gangnam District, southern Seoul in 2017 after the Seoul city government purchased the land to build the museum. Because the museum is essentially a renovated high school, it consists of multiple buildings and the different galleries are dispersed throughout them.

As a result, three of the nine commissioned works are information desks. The museum placed significance on the design of its information desks, as they greet visitors and give them a first impression of the gallery. 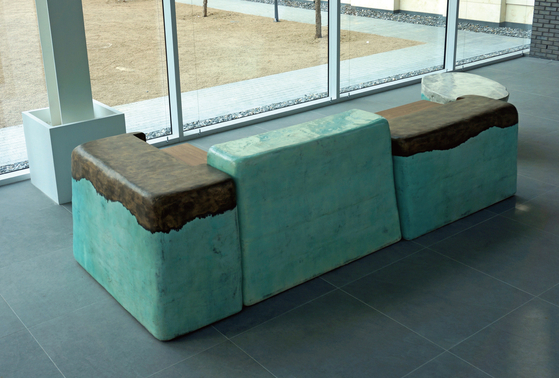 Furniture artist Choi Byung-hoon’s information desk is carved out of a large rock from Indonesia.

“People naturally assumed I would make something with wood because I’m a furniture artist, but I wanted to try something different,” said Choi. “I decided to use this rock that’s grey and rough on the outside and black on the inside. I polished the black side to be smooth and shiny, but left the grey exterior as it is. I think the two sides represent a contrast between polished modernity and primitive nature.” 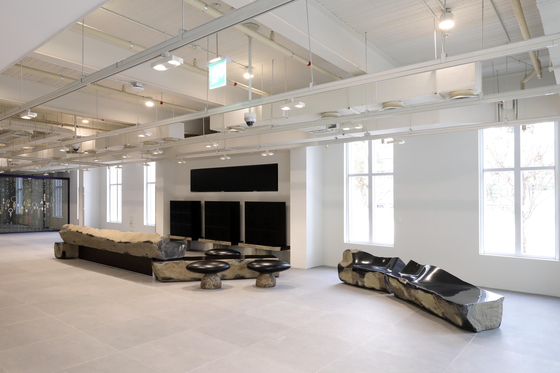 Furniture artist Choi Byung-hoon’s information desk is carved out of a large rock from Indonesia. [SEOUL MUSEUM OF CRAFT ART]


Designer Park Won-min created a bright red ombre information desk using resin for the children’s gallery of the museum. He chose the eye-catching color as he thought the vibrancy would grab the attention of child visitors.

“We believe one of our roles as a museum of craft is to encourage artwork using diverse techniques and material,” said Director Kim. “So we thought a young artist’s work using a modern substance like resin was exactly the type of new approach that a craft museum should make.” 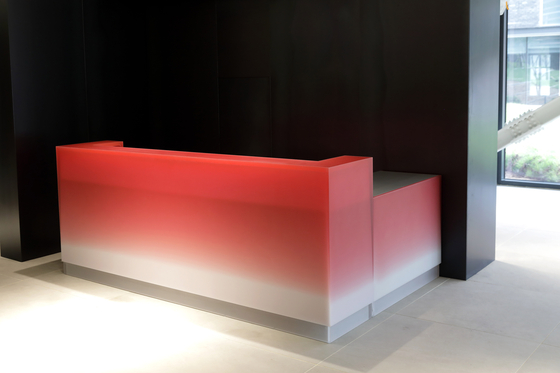 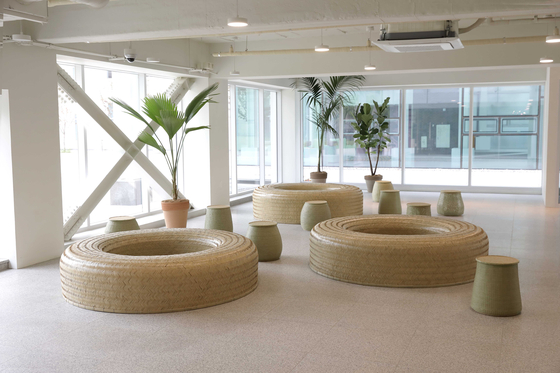 
The museum has also prepared ample space for visitors to take a break and rest their feet. One of them is bamboo craft artist Han Chang-gyun’s donut-shaped benches woven out of bamboo strips. A circular bench consists of 150 bamboo strips, each 1.8 meters (6 feet) long. 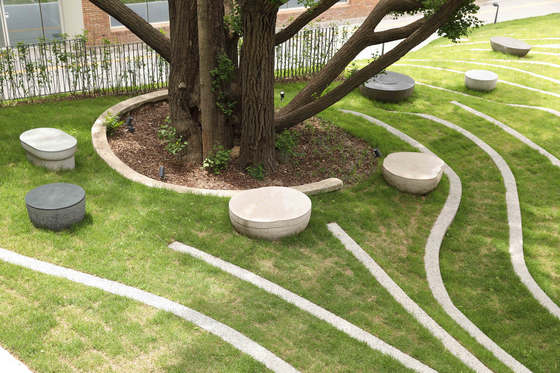 
Many of the commissioned artworks are placed outdoors. Master mason Lee Jai-soon, Korea’s intangible cultural asset No. 120, carved nine stone stools out of rocks from each province in Korea, including Jeju Island.

Ceramic artist Kim Yik-yung’s colorful pentagonal ceramic stools, using Joseon-style white porcelain and obangsaek — a traditional Korean color spectrum of red, blue, yellow, white and black — are placed throughout the museum, mostly on the rooftop to provide visitors with a place to enjoy the view of central Seoul’s Bukchon. 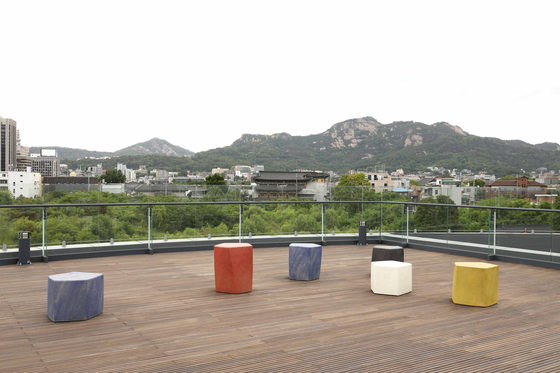 
Ceramic artist Lee Kang-hyo’s stools resembling onggi (traditional round earthenware pots) are scattered across the museum’s yard and under trees so that visitors can relax in the shade. 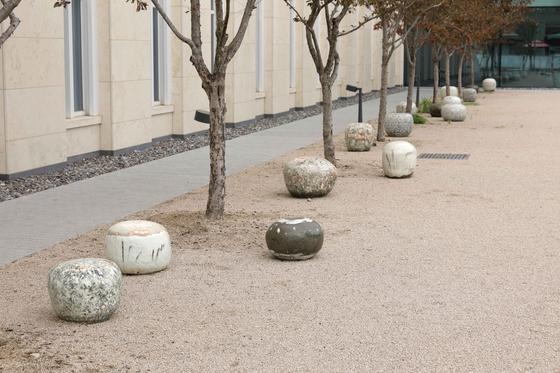 
“Ceramics are usually used indoors, but I kept in mind that these will be used outdoors and focused on making them extra sturdy,” Lee said.

The museum’s efforts to fill its spaces with craftwork from as many genres and styles as possible build up expectations for the official opening on July 15.