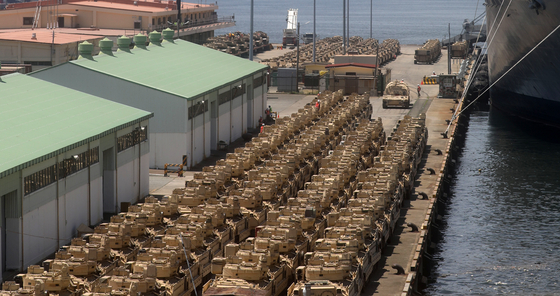 Military equipment of the United States' Bulldog Brigade, or the 3rd Armored Brigade Combat Team of the 1st Armored Division, from Fort Bliss, Texas, arrive at the port city of Busan and are being prepared to be transported Monday. The 3,700-strong Bulldog Brigade and their equipment and vehicles, including M1 Abrams tanks, will be on a nine-month rotational deployment to support the 2nd Infantry Division, Korea-U.S. Combined Division and Eighth Army. [SONG BONG-GEUN]