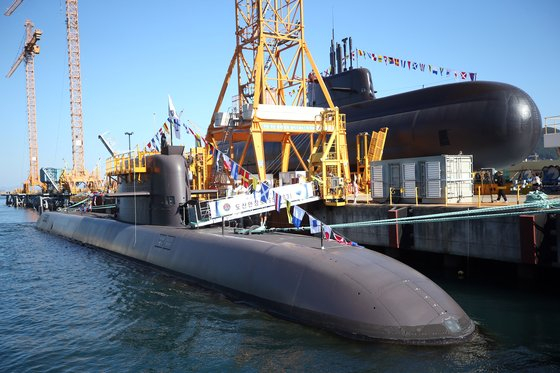 
Hackers connected to North Korea stole information about Navy vessels and submarines designed and built by Daewoo Shipbuilding & Marine Engineering, possibly including research for a domestically designed nuclear-powered submarine, according to multiple government sources on Sunday.

“The targeted documents include long-running conceptual research into the development of nuclear-powered submarines that was conducted by Daewoo Shipbuilding,” said one source at the technology protection division of the Defense Acquisition Program Administration (DAPA).

“Some of the documents got out, but we haven’t been able to verify that the ones related to the nuclear-powered submarine development were among these,” the source added.

There is a possibility that the partially successful hacking of Daewoo Shipbuilding is related to a May 14 intrusion, when a foreign IP address used by the North Korean hacking organization “kimsuky” was identified on the internal system of the Korea Atomic Energy Research Institute, according to People Power Party (PPP) lawmaker Ha Tae-kyung's office.

However, according to another source, the organization that hacked Daewoo Shipbuilding was different from the one that hacked the company in April 2016, which resulted in the leak of 60 naval design secrets.

“It almost appears that different organizations and teams under the command of the Reconnaissance General Bureau are competing to infiltrate the South,” said the source. The bureau is North Korea’s military intelligence agency, which targets Japan, South Korea and the United States.

The development of a domestically built nuclear-powered submarine is a project originally started under the administration of President Roh Moo-hyun. Dubbed the 362 initiative — after the date Roh signed his approval — the program was derailed just a year later, with classified information leaked to the public and its nuclear activity brought under the scrutiny of UN nuclear watchdog International Atomic Energy Agency.

President Moon Jae-in has publicly stated his support for such a submarine, promising in his campaign manifesto that he would negotiate an amendment to the U.S.-South Korea Nuclear Cooperation Agreement that limits South Korea’s use of nuclear energy.

While development of a nuclear-powered submarine is within South Korea’s current technological capabilities, government sources have said that the United States is strongly opposed to South Korea’s use of nuclear fuel to power submarines.

Nuclear-powered submarines are one of the components, alongside aircraft carriers, essential to a country’s possession of a blue-water navy that can project its power overseas.

The main advantage of nuclear-powered submarines over conventional submersible vessels powered by diesel fuel is that they can remain at sea for three to six months at a time. Conventional submarines must return to port after two weeks for refueling.

As such, nuclear-powered submarines provide greater speed, distance, and longevity to reconnaissance missions at sea.