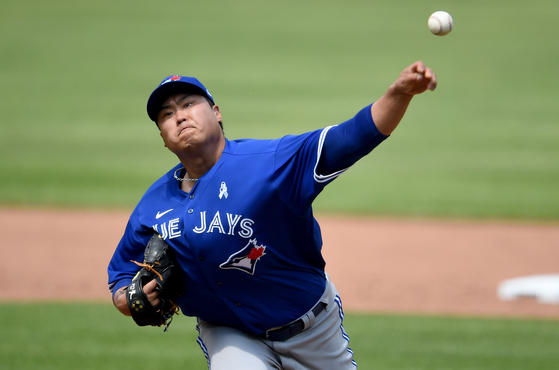 Ryu Hyun-jin of the Toronto Blue Jays pitches in the fifth inning against the Baltimore Orioles at Oriole Park in Baltimore, Maryland on Sunday. [AFP/YONHAP]


Ryu Hyun-jin put the last few weeks behind him with a decisive return to form on Sunday, giving up one run on three hits in seven innings pitched as he led the Toronto Blue Jays to a 7-4 win over the Baltimore Orioles.

But while Ryu had a big night in Baltimore, Maryland, Kim Kwang-hyun walked away with a loss in Atlanta, Georgia, throwing up almost the exact same numbers as Ryu but without the run support in the two Korean pitchers' third same day start of the season.

Ryu's one earned run came early in the game — a solo home run to Trey Manchini with one out at the bottom of the first. Ryu followed the long fly up with a single, but then forced a double play to end the inning at Oriole Park in Baltimore.

Ryu gave up one more single in the second, and then got down to work. Ryu retired the next 10 batters in order, keeping the Orioles off the bases until two outs at the bottom of the fifth, when he gave up a walk to Pedro Severino. The single walk didn't throw Ryu off his game, and one pitch later he had secured the flyout to end the inning.

The Korean southpaw continued his dominance in the sixth and seventh, retiring the Orioles in order before his time on the mound came to an end.

While Ryu had kept things locked down on the mound, the Blue Jays had been busy on offense as well. A four-run fifth gave the Toronto club a 4-1 lead going into the eighth, where they promptly scored two more to take the game to 6-1.

Ryu was replaced on the mound by Trent Thornton, who gave up a solo home run followed by a hit-by-pitch and another home run in the eighth, giving the Orioles three more runs to put the score at 6-4.

It wasn't enough to get Baltimore back into the game, however, and one more run at the top of the ninth for the Blue Jays secured the 7-4 win.

Ryu threw 100 pitches in seven innings with three hits and one earned run to take his ERA to 3.25. He gave up one walk and struck out four.

Over in Atlanta, Kim threw up very similar numbers — three hits, one earned run and one walk — with two strikeouts in four innings pitched. But while Ryu's outing was heralded as an exciting return to "vintage Ryu," a complete lack of run support left Kim taking yet another loss. 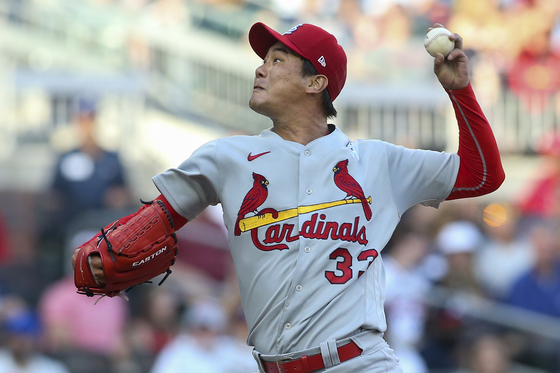 
Kim had a shaky start against the Atlanta Braves, giving up a walk to kick things off before reining in his control to get three quick outs to end the inning. The second went the same way — a single to lead things off followed by a strikeout, a lineout and a groundout.

Baseball commentators often say a solo home run won't hurt you, but in Kim's case that wasn't the case. A single homer to Ronald Acuna in the third put the Braves on the board, and although Kim quickly closed out that inning, the damage was done.

He allowed a single in the fourth before forcing a double play to end the inning, before being lifted for a pinch hitter.

That one home run was it for the Braves, but as the Cardinals were completely shutout in the shortened, seven-inning game — they got just two hits — Kim was stuck with the loss.

Kim threw 47 pitches in four innings with three hits and one earned run to take his ERA to 3.60. He gave up one walk and struck out two. Kim now carries a 1-5 line and hasn't picked up a win since the end of April.