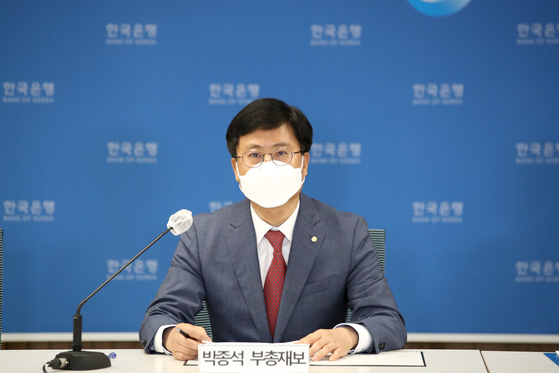 The Bank of Korea (BOK) warned of growing vulnerability to the financial system from mounting household debt, probably signaling a raise in interest rates.

The central bank said in a regular financial stability report released Tuesday that should an unexpected economic crisis takes place, the country's gross domestic product (GDP) could contract by as much as 2.2 percent.

Household debt on its own exceeded the country's GDP in the first quarter. The household debt to GDP ratio hit 104.7 percent, up 9.1 percentage points on year. Household debt as of March amounted to 1,765 trillion won ($1.56 trillion), up 9.5 percent on-year.

The company debt to GDP ratio was 111.6 percent, up 6.8 percentage points from a year ago.

The rise in household debt was largely related to a steep rise in asset prices, including real estate and stock, which spurred people to buy both, often on borrowed money.

"The rise in asset prices was a major driver raising the country's potential financial vulnerability," the report said.

According to the central bank, an increasing gap between rises in asset prices and growth of the real economy has raised the vulnerability of the financial system to external shocks.

The bank's own financial vulnerability index (FVI) grew from 41.9 in the fourth quarter of 2019 -- before the Covid-19 pandemic -- to 58.9 in the first quarter of this year. A higher FVI means the gap between growth of the real economy and asset prices is widening and financial institutions have become less resilient.

The BOK projected that if the FVI continues to grow to around 68.1 by 2024, the country's economy could lose resilience and contract by as much as 2.2 percent if it experiences a financial crisis.

The central bank emphasized the need to reduce debt and narrow the gap in growth between the real economy and asset prices, and hinted at rate increases as a potential option.

"The widening gap needs to be taken into consideration while deciding on interest rate policies," said Park Jong-seok, deputy governor of the BOK during a briefing held Tuesday.  "There is a need to normalize currently expansionary monetary policies in an orderly manner at the right time."

The central bank has been sending signs of a potential rate hike since earlier this year and alerting households and companies they must be ready for it.

BOK Gov. Lee Ju-yeol  said during a speech commemorating the central bank's 71st anniversary earlier this month that the bank can't rush a rate increase. "But at the same time," he said, "we are considering the risks of massive side effects if we are late."