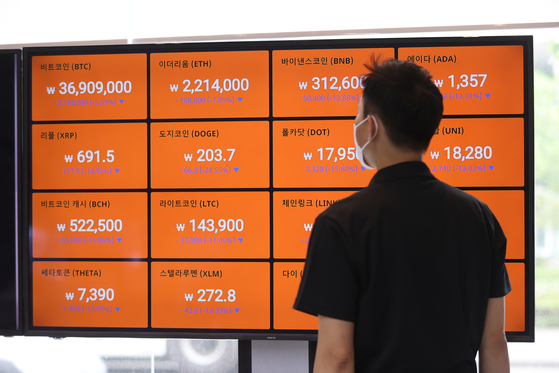 Cryptocurrency prices are displayed on a digital screen operated by Bithumb in Seoul on Tuesday. Prices of cryptocurrencies are falling on news the Chinese government is cracking down on miners. [YONHAP]

Bitcoin prices are plunging on news the Chinese government is cracking down on bitcoin miners.

On Tuesday at 4 p.m, Upbit, the country's largest cryptocurrency exchange by volume, reported bitcoin trading at 38.2 million won ($33,662). Its price is now less than half of its peak, recorded in April at over 81 million won.

China’s Global Times reported Monday that "more than 90 percent of China's bitcoin mining capacity is estimated to be shut down" due to an intensified nationwide crackdown against cryptocurrency mining.

China's central bank recently summoned some banks and payment firms, including Alipay, urging them to crack down on cryptocurrency trading, Reuters reported Tuesday.

The situation in China led bitcoin prices to plummet globally as the majority of global cryptocurrency mining takes place in China.

The bank projects that investment losses incurred from cryptocurrency trading won't have a massive impact on the Korean economy for now. The bank said that as Korean financial companies are currently prohibited from investing in cryptocurrencies and not a lot of local companies are engaging in crypto asset businesses, the impact of price falls may not be so big on Korea's overall economy, though individual investors, especially young investors, should beware.

"Market capitalization of crypto assets is about 1 percent of total financial assets owned by households," the bank said.

The bank estimates total market capitalization of Korea's cryptocurrency market to be around 50 trillion won.