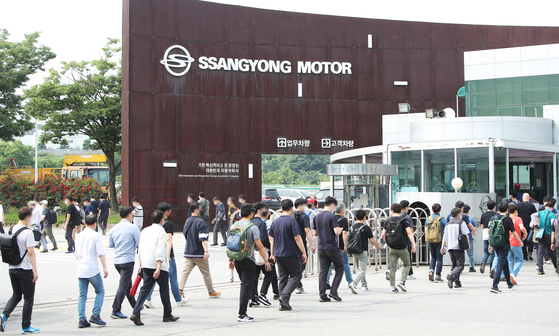 
SsangYong Motor suppliers are receiving a second round of support as the government works to save the automaker.

The Ministry of Trade, Industry and Energy said Tuesday that it will backstop 25 billion won of funding to SsangYong Motor contractors. Second-tier suppliers will be able to avail themselves of the financing.

The Korea Credit Guarantee Fund will be supporting the loans, and the Gyeonggi government will be taking on 5 billion of the risk.

In January, the government offered 50 billion won of loan guarantees to SsangYong suppliers. This first round was available to roughly 250 tier 1 partners, and tier 2 suppliers could not apply.

The terms of the program have also been broadened. The maximum on loans per client was taken from 3 billion won to 7 billion, while the guarantee ratio has been increased from 90 percent to 95 percent.

The government said the loan program is designed to give the suppliers some breathing room as the automaker is restructured and to allow them to maintain their head counts through the trouble.

It emphasized the importance of the parts supply ecosystem in Korea.

Mahindra & Mahindra, the majority shareholder, asked for a bailout for the automaker in January 2020 when it failed to find an investor to come in with capital.

SsangYong has been in court receivership since April 15. Receivership is a step short of bankruptcy and involves a court-led workout.

It was previously placed in receivership in 2009 after 51-percent owner SAIC abandoned the company, refusing to offer support and leaving the automaker in shambles. SsangYong left receivership in 2011 after the Indian investor came in to take control.

In June 2020, the Indian shareholder said it was giving up on the investment, with the Reserve Bank of India approving Mahindra & Mahindra reducing its ownership from 75 percent to 25 percent in March 2021.

SsangYong Motor has been suspended but not delisted. The Korea Exchange has given it a grace period ending April 14, 2022.

Earlier this month, the company’s union accepted a plan that includes putting half the employees on unpaid leave for up to two years and cutting the salaries of executives 20 percent on top of an earlier 20 percent cut.