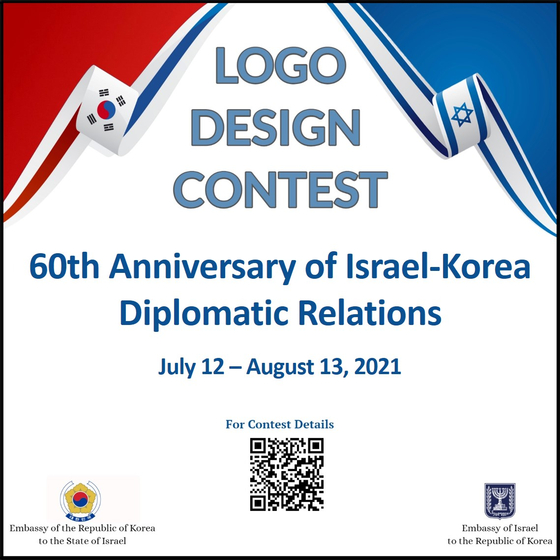 [EMBASSY OF ISRAEL IN KOREA]

The Embassy of Israel in Korea and the Embassy of Korea in Israel launched a contest for a logo design to celebrate the 60th anniversary of diplomatic ties between the two nations next year.

“The State of Israel and the Republic of Korea are vibrant democracies, and creative, passionate societies sharing a sense of destiny,” the Embassy of Israel in Korea said in a statement. “Both nations are rooted in antiquity, but achieved their independence in 1945 and 1948 respectively in a century of trauma and great hardship.

"The 60th anniversary graphic emblem needs to capture this essence and reflect the robust engagement developing between the governments, peoples, economies, and cultures of Israel and Korea.”

Korea and Israel established diplomatic ties in 1962. The two nations signed a free trade agreement this year, the first FTA for Israel with an Asian nation, and Korea’s first FTA with a nation in the Middle East.

Submissions for the logo contest can be made until midnight of Aug. 13 in Seoul. Contestants must be Israeli or Korean nationals living in either country. The submissions will be judged on creativity, artistic quality, practicality, as well as on how much the design reflects key values in bilateral ties.