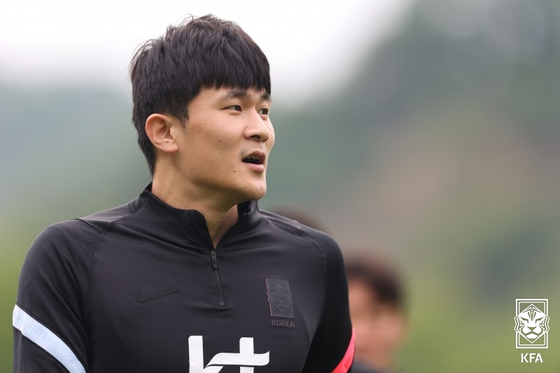 According to Portuguese football news website Record on Monday, FCPorto SAD, the company that owns the Primeira Liga club, has reached a deal with Beijing Guoan to acquire the 24-year-old defender.

Porto is one of a number of top European clubs to show an interest in Kim. Earlier this month, Kim was linked to Italian Serie A club Juventus, with reports going so far as to say the club had already agreed a deal with Beijing, where Kim is under contract. When asked to comment on the story last week, Kim said he didn't think he was good enough to play for the club.

Kim is highly likely to be named as one of three wildcard players to Korea's U-23 squad for the 2020 Tokyo Olympics next month.

Prior to Juventus and Porto, Tottenham Hotspur also tried to acquire Kim last year, and Chelsea and Liverpool have both shown an interest in signing him.

According to Transfermarkt.com, a website that specializes in player statistics, Kim is currently valued at 2 million euros ($2.4 million).

As of press time, neither FC Porto or Beijing Guoan had confirmed that a deal has been made.