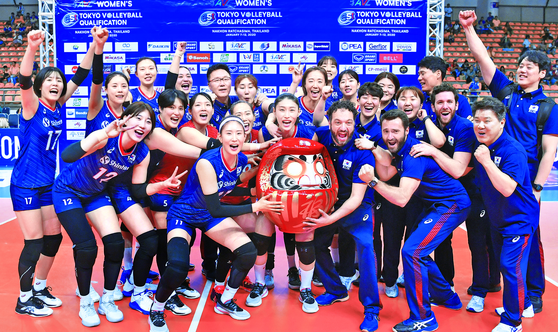 
The Korean national women's volleyball team will be back in action on the big stage next month.

Korea grabbed the sole Olympic berth at the Asia qualifiers in January, 2020 in Nakhon Ratchasima, Thailand, after outplaying Thailand in straight sets.

The women's volleyball team's Olympic debut was at the 1964 Tokyo Games, when volleyball first became an official Olympic sport. It was an inauspicious start and Korea had to settle for last place.

But Korean volleyball gradually improved, finishing fifth at the following 1968 Mexico City Games and fourth at the 1972 Munich Olympics.

Korea's first-ever medal in volleyball came at the 1976 Montréal Summer Olympics, where the women's team won bronze. Korea has qualified seven times since then — including at London 2012 and Rio 2016 — but has never managed to medal again. 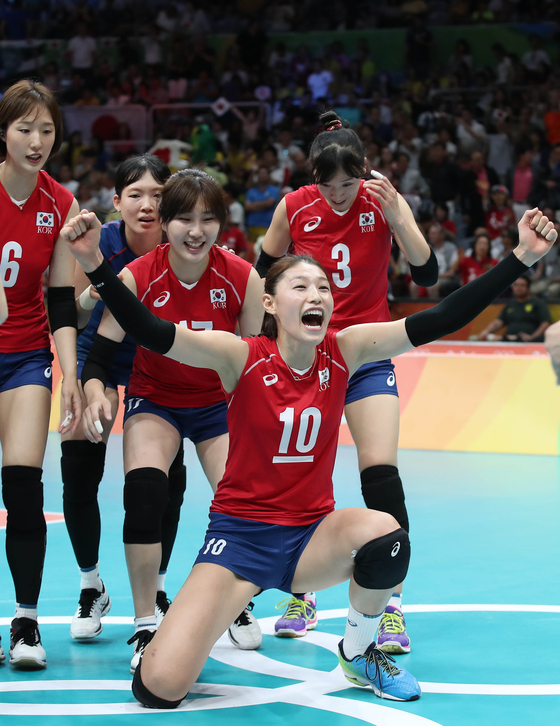 Kim Yeon-koung, center, celebrates with her teammates after defeating Japan in the preliminary rounds of the 2016 Rio Olympics on Aug. 6, 2016. [OLYMPIC JOINT PRESS CORPS]

Korea finished fourth at the London Games, losing to Japan in the bronze medal match, and fifth last time around in Rio, losing to the Netherlands.

Kim was on particularly impressive form in London, where she received the MVP award and the Best Scorer titles while Korea finished fourth.

On top of the Summer Games, Kim has had a glittering career of her own.

In Korea, she led her team the Cheonan Heungkuk Life to become the V League champion during her first professional 2005-06 V league season. She personally swept the podium that year, winning the New Face award, MVP awards for both the regular season and championship, best scorer, best spiker and best server awards. She also contributed to Heungkuk Life taking the title in the 2006-07 season.

After playing in the Japanese, Turkish and Chinese leagues for 11 years, Kim returned to her first team in Korea this year with an eye on the big stage.

Right after finishing the V league 2020-21 season as runner-up, Kim jetted off with the rest of the national team to Rimini, Italy to compete at the Volleyball Nations League (VNL).

Korea finished 15th at the VNL with three wins against Thailand, Serbia and Canada and 12 losses. The team has now returned to Korea and will self-isolate for a week, then train in a bubble for a week. They will then head to the Jincheon training center before leaving for Tokyo. 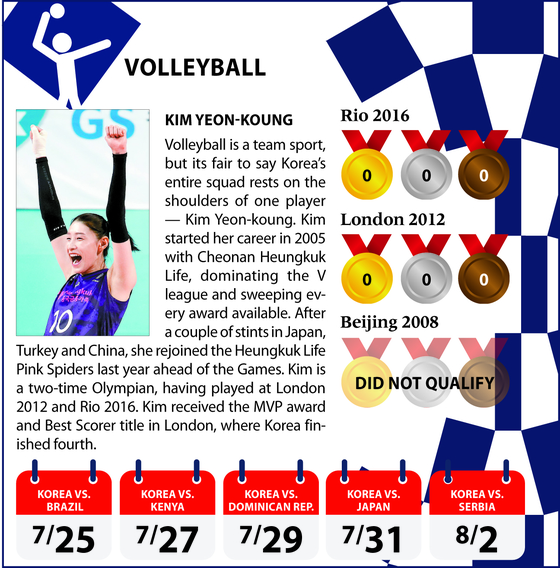 Only the women's team will be representing Korea at the Olympics as the men's team lost to Iran in the Asian qualification semifinals held in January 2020 in Jiangmen, China.

The twelve countries competing in the women's event are divided into two pools. Korea is in Pool A alongside Japan, Serbia, Brazil, the Dominican Republic and Kenya. Pool B consists of China, the United States, Russia, Italy, Argentina and Turkey.

Korea will need to finish the preliminaries within the top four to advance to the quarterfinals.

Currently, 19 players are on the national team roster with head coach Stefano Lavarini yet to announce the final 12 who will fly to Tokyo in July.

Korea will begin its hunt for that elusive second medal against Brazil at 7:40 p.m. on July 25.