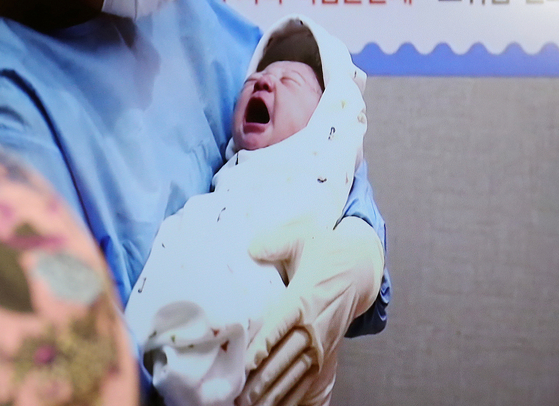 A baby born at the stroke of midnight last New Year's day at a hospital in Goyang, Gyeonggi. Korea's number of births continue to fall despite government attempts to encourage them. [YONHAP]

The so-called natural population decline in April, which is the difference between births and deaths, was 2,267 -- nearly double the 1,355 in April 2020. As of April, Korea's natural declining population continued for 18 consecutive months.

Hong even used the term “age-quake,” coined by British scholar Paul Willis, who compares the impact of an aging population to an earthquake.

Hong pointed out that in 10 years, one out of every four Koreans will be senior citizens.

“The three population risks – a shrinking population, reaching a 'super-aged' society and the disappearance of [people] from non-urban regions - are becoming a reality,” Hong said.

“[The government] has been consistently making preparations as these risks weren't unexpected,” Hong wrote. “In 2005, the government created a committee on low birth and an aging society and in 2019 we created a task force with different government departments participating.”

He emphasized government policies that will be applied starting next year, including 3 million won ($2,600) to be given to every family that has a new child, a 2 million won celebratory voucher and 1 million won in reimbursement of medical bills above insurance coverage.

Additionally, next year every household with infants under the age of one will receive a monthly subsidy of 300,000 won. This will be expanded to 500,000 won in 2025.

To encourage parents to take maternity and paternity leaves, the government will pay up to 3 million won to couples who take leaves at the same time.

“In the next four years the government will spend roughly 9.5 trillion won on five signature projects to counter the low rate of births,” Hong said.

In the next three months, he continued, the government will be announcing measures to tackle other major social issues such as utilization of foreigners in the workforce and care for senior citizens.

“However, the results haven't been great compared to our policy efforts,” Hong admitted.

The population problem is long term, and any efforts to tackle it will take generations, he said.

He noted the challenges presented by more active participation of women in the workplace and changing views on marriage and having kids.

“We don’t have time to hesitate,” Hong wrote. “Without special action, in 30 to 40 years an age-quake could happen.

'I welcome the plan if it reduces the cost of education'