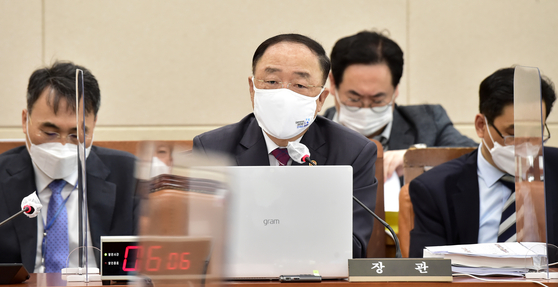 
The Democratic Party (DP) is getting its wish for the size of the supplementary budget, but it is not getting everything it has asked for.

A support payment for all Koreans is not being considered, according to the government.

On Wednesday, Finance Minister Hong Nam-ki said that the budget would be 30 trillion won, which is what the DP has been pushing.

He added that a relief program like the one in May 2020, when all Koreans received a payment, is not being considered. Selective disbursements for those most affect by the pandemic are on the agenda, he noted.

The DP argues that tax revenues are sufficient to cover the grants, as 33 to 35 trillion won more in taxes are expected to be collect this year over last year.

In the program last May, every household in Korea received 400,000 won to 1 million won.

The Finance Minister emphasized that the supplementary budget being considered will not add to the already growing government debt, saying it will be covered by tax bonanza, but he does not think the total additional collections will be as high as the estimates suggested by the DP.

“Because of taxes deferred last year and paid this year, in the first half we have collected more,” he said. “Including the additional taxes collected from businesses as a result of the rapid recovery, we expect taxes to exceed our target.”

“We hope to submit the supplementary budget to the National Assembly in early July,” he added.