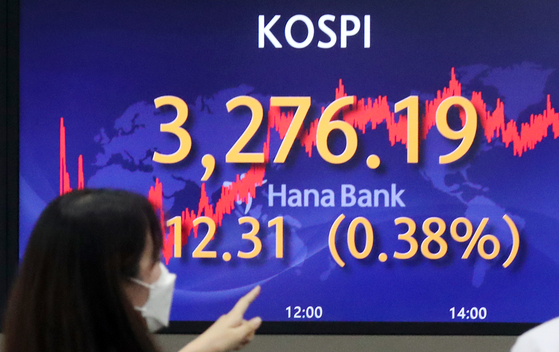 
Stocks advanced for the second consecutive day Wednesday as investor worries over fast tapering were partially eased by U.S. Federal Reserve comments that support its accommodative policy. The won fell against the dollar.

Trading volume was moderate at about 1 billion shares worth some 17.4 trillion won ($15.3 billion), with losers outnumbering gainers 595 to 271.

Local stocks advanced, taking a cue from Fed Chairman Jerome Powell's reassurance that the recent inflation rate has grown faster than expected but will likely stabilize down the road.

"The fall in U.S. Treasury yields seem to have prodded investors to take a look at tech shares again, although future comments from the Fed may bring adjustments," Shinhan Financial analyst Choi Yoo-joon said.

The local currency closed at 1,137.7 won against the dollar, up 5.8 from the previous session's close.