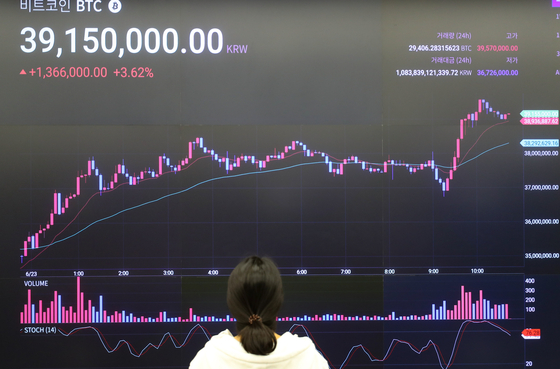 Bitcoin prices recovered after plunging below the $30,000 mark Tuesday for the first time since January.

Late Tuesday night, bitcoin prices plummeted to around $28,890, according to CoinMarketCap. The $30,000 mark was considered a key support level on the charts for analysts and investors.

The prices soon recovered to around $34,162 per coin, up 4.7 percent over 24 hours, as of 3:00 p.m. Wednesday, but with the cryptocurrency forming a so-called death cross, investors remain concerned about the future price movement of the coin.

The death cross is when a short-term trendline crosses below a long-term average trendline, with the 50-day and 200-day trendlines being common pairs for comparison. Over the weekend, bitcoin’s 50-day moving average fell below its 200-day moving average, Reuters and Bloomberg reported.

Technical analysts say this death cross is a major bearish signal. Breaking below the $30,000 just reinforced the negative sentiment generated by the death cross.

The so-called kimchi premium, the difference between the price of bitcoin in Korea versus the international prices, has dropped from about 25 percent in April to between 1 and 2 percent, suggesting lower demand in Korea, which is an influential market for the pricing of the coin.

Bitcoin managed to return to positive terrain in the meantime.

Seo Sang-young, an analyst from Mirae Asset Securities said in report Wednesday that the latest recovery “is likely to have been affected by knee-jerk buying by some traders following the plummet.”

While views are divided on the future price movement of bitcoin, some say that this is the time to buy bitcoin.

“I personally think the best trade right now for crypto is long bitcoin dominance or short alternative cryptocurrencies against bitcoin,” Matthew Dibb, chief operating officer and co-founder of Stack Funds told the CoinDesk, a news agency specializing in digital assets. “If the market falls, bitcoin should fall less than altcoins. If the sentiment recovers, bitcoin will go up more than altcoins.”

With the largest cryptocurrency experiencing steep falls affected by the signaling of an interest rate hike by the U.S. Federal Reserve as well as Chinese government’s move to crack down on cryptocurrency mining and tighten regulations on crypto asset trading, alternative coins, or altcoins — cryptocurrencies apart from bitcoin — fell at a faster pace.

In Korea, altcoin investors are facing greater concerns as local exchanges started purging lesser-known, underperforming coins from exchanges to prepare for a tighter monitoring on their operations by the country’s financial regulator.

Upbit, he country’s largest cryptocurrency exchange by volume, announced on June 18 the end to trading of 24 digital assets including komodo and adex. It decided to delay its decision on a coin called basic, which was put on its watchlist.

Terminating trading of coins led to a price plunge of the select coins, leading to big losses.

Rep. Noh Woong-rae of the ruling Democratic Party of Korea said in statement Wednesday that “it is irresponsible for exchanges to suddenly terminate trading of coins without properly explaining grounds to investors after listing poor coins relying on a rule of thumb in the first place.”