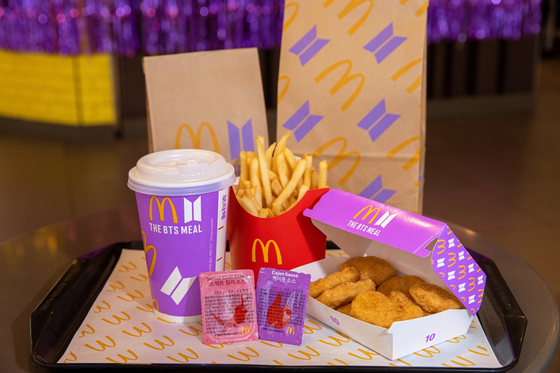 
McDonald’s Korea sold more than 1.2 million BTS Meals since they were introduced on May 27.

That number of sales for a single set meal “is unprecedented,” according to McDonald’s Korea in a statement Wednesday.

The BTS Meal, allegedly favorite of the band members, consist of 10 chicken McNuggets, a medium Coke, medium fries and two dipping sauces, sweet chili and Cajun, which were developed in Korea.

The company said the number of McNuggets sold daily in branches jumped 250 percent following the launch of the BTS Meal compared to the average daily for four weeks before the meal was launched.

The set meal started selling in the United States on May 26 and in Korea the following day. It is being offered in 50 countries altogether for a month.

It will be available in Korea through June 30.

The BTS Meal “has been sold in surprising volumes,” said a spokesperson for McDonald’s Korea in a statement. “We expect more customers to look for it during the week left.”

High demand for the meals has made them difficult to get in some locations, and the packaging varies slightly from country to country.


The success of the meal caused a secondary market in the packaging it comes in. People tried to sell the empty paper bags that contained the BTS Meal on eBay with bidding starting at $750.

The packaging for the meal is special and uses purple, a color cherished by BTS fans.

Some fans considered the BTS Meal as the band’s official merchandise.