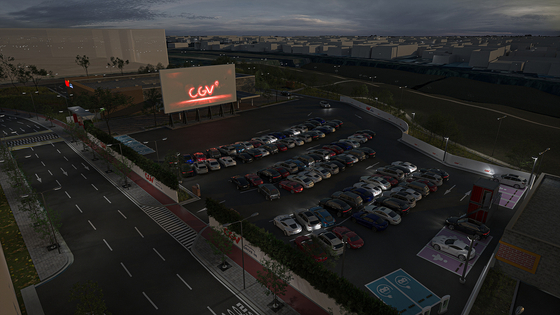 Located near the Square1 shopping mall in Yeonsu District, Incheon, the drive-in theater can accommodate up to 100 vehicles and has a 20-meter (65 feet) by 8.3 meter screen.

Two movies will be played per day. Tickets will cost 24,000 won ($21) per vehicle on week days and 26,000 won for weekends and holidays. There is no limit to the number of passengers per car, CGV said, but only passenger cars and recreational vehicles — like minivans or sports utility vehicles — are allowed in.

Electronic vehicle chargers are installed at the location as well. Customers can order food like popcorn, hot dogs and drinks as in any CGV branch. They will be delivered from a CGV theater inside the Square1 mall to a pick-up zone at the left of the movie screen. Sound will be transmitted via radio, with visitors needing to tune their car radios to a specific frequency.

As a promotional event, CGV previously ran a drive-in theater at SeoulLand, an amusement park in Gwacheon, Gyeonggi, last year for around four months from late July. The Incheon drive-in theater, however, is the company’s first permanent operation of its kind.

“With the insight obtained from last year’s event, we decided to open a permanent drive-in theater for customers that couldn’t come to watch movies due to concerns of the coronavirus,” said Cho Jin-ho, CGV’s sales marketing executive.

The first movie to be played at the location is the 2001 film “The Fast and the Furious.” To celebrate the drive-in theater’s opening, CGV has prepared a free session on Thursday for those that applied online from Friday last week. All free tickets were taken by Monday, the company said.

Earlier this month, Lotte Cinema opened two drive-in theaters, one in Busan and one in Bundang, Gyeonggi.