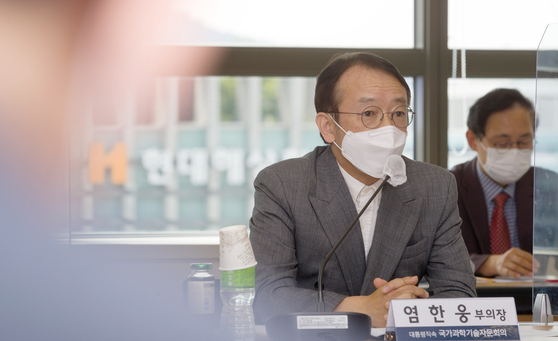 
The Presidential Advisory Council on Science and Technology has set its research and development budget for 2022 at 23.5 trillion won ($20.7 billion), a 4.6 percent increase compared to this year.

The council stressed the importance of securing a lead in global technology, emphasizing the need for speedy investment in securing talent and technology.

According to the council on Thursday, the government will invest in 1,182 projects, 233 more than this year.

The investment is divided into three major categories — overcoming crisis and economic recovery; science technology and changing the economic structure; and inclusive innovation and quality of life.

The budget earmarked for crisis and economic recovery, which includes R&D spending on technology related to viral infections, innovative growth, digital transition and material, parts and equipment, will increase 15 percent from this year’s to 6.75 trillion won.

Spending on science technology and changing the economic structure, which includes R&D on space, quantum technology and 6G, as well as carbon neutrality, will increase 21 percent to 5.45 trillion won.

The budget for inclusive innovation, which includes supporting young scientists and SMEs, will be expanded 25 percent to 5.98 trillion won.

Within inclusive innovation, the council has created a new sector with 940 billion won earmarked for R&D research centers outside of the greater Seoul area.

The council noted that in entering the last year of the Moon Jae-in administration, the government should strongly push a national agenda of innovative growth and digital transition to further boost economic recovery.

“A major achievement was made during the heads of state meeting between Korea and the United States in May with the Artemis Accords on science and technology, including the strengthening of the partnership in space exploration and aviation research,” said Yeom Han-woong, a physics professor at Pohang University of Science and Technology (Postech) who is also vice chair of the council.

“Establishing future-oriented cooperation [with the United States] including strengthening cooperation in leading industries such as nuclear energy, batteries and semiconductors, high-tech areas such as bio, 6G and quantum technology, and on climate change, not only proves our science and technology skills have been recognized, but is also an opportunity for new growth.”