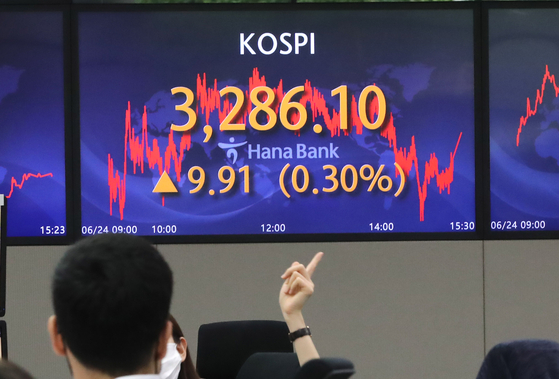 A screen in Hana Bank's trading room in central Seoul shows the Kospi closing at 3,286.10 points on Thursday, up 9.91 points, or 0.30 percent, from the previous trading day. [YONHAP]

The benchmark Kospi advanced 9.91 points, or 0.3 percent, to close to 3,286.1 points, extending its winning streak to the third consecutive session.

After a solid start, the Kospi extended its gains, offsetting market concerns about how soon the U.S. Federal Reserve would start tapering its accommodative policies.

Tech stocks rallied as investors bet on a strong economic rebound. Korea's consumer sentiment increased for the sixth consecutive month in June, as the country's exports signaled a strong recovery amid progress in Covid-19 vaccinations.

The gain came despite the Bank of Korea Gov. Lee Ju-yeol's comments that the bank may conduct its first post-pandemic rate hike this year, noting the economy's robust recovery from the Covid-19 pandemic.

The stock index trimmed gains after peaking at the intraday high of 3,292.27 points but bounced back toward the end of the session on strong institutional buying.

"The market shock from the Fed's quicker tapering timeline has been already projected in the stock prices in the previous June FOMC meeting," Kiwoom Securities analyst Kim Yu-mi said.

"The recent hike in exports seems to have fueled investor optimism for better corporate earnings and lifted local stock prices," she added.

The local currency closed at 1,134.9 won against the dollar, down 2.8 from the previous session's close.