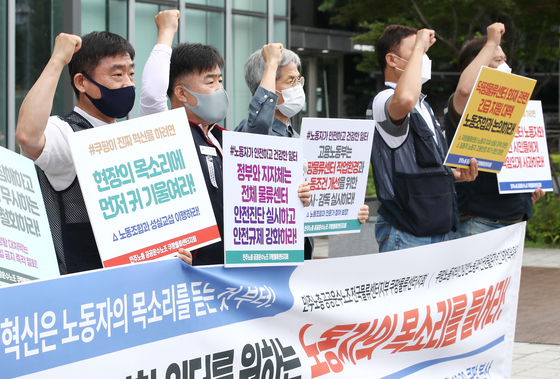 Union complains about the Coupang work environment at a press event held in front of the company’s headquarters in southern Seoul on Thursday. [YONHAP]


A war of words has broken out between a union and Coupang following a deadly warehouse fire last week, with lively protests being met with statements from the embattled company.

"Coupang should stop lying," said a person who posted a message on the Blue House petition site claiming that security guards ignored and laughed at reports of fire.

The person, present at a rally in front of Coupang’s headquarters, claimed to be a worker at the Deokpyeong Logistics Center in Icheon, Gyeonggi, which caught fire June 17 and burned for six days.


The union itself focused on the company’s management of dislocated workers after the fire.

Coupang “only sent a text telling us to choose a warehouse to be relocated to without holding any discussions on providing unemployment compensation,” said Kim Han-min, a spokesperson for a transportation union at a press event held in front of Coupang headquarters in Songpa District, southern Seoul, on Thursday. “We have been forced to choose without being given a time to mull over how to work from now on.”

The union is under the Korean Confederation of Trade Unions, which represents Coupang workers.

Coupang dismissed the union’s statements, calling them “distorted” and false.

“Unlike the union’s claims that Coupang is compelling employees to resign, 97 percent of the Deokpyeong Logistics Center employees, or 1,446 people, have been relocated to other warehouses as of June 23,” said Coupang in a statement following the union’s press event on Thursday.

“Coupang is providing 100 percent pay to employees even when they are not working,” Coupang added in reference to employees from the warehouse who took days off after the incident.

On the same day, a separate press event was held by former Coupang warehouse employees in front of the company’s headquarters.

At the event, hosted by the progressive Jinbo Party, the former employees complained of the company’s work environment, saying that they were called by the last four digits of their mobile phone numbers instead of their names and were forced to write letters of apology for taking bathroom breaks.

Coupang tries to show its warehouse isn't too hot