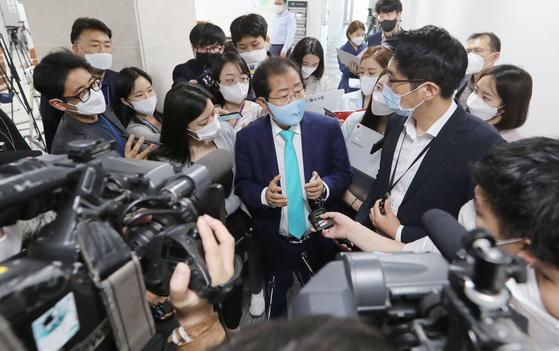 Rep. Hong Joon-pyo, center, talks to reporters after a press conference at the National Assembly on Wednesday. Earlier in the morning, the People Power Party's Supreme Council approved Hong's return to the party after 15 months. [YONHAP]

The PPP’s Supreme Council on Thursday approved Hong’s application to return to the party. “It was passed unanimously,” Chairman Lee Jun-seok said after the meeting. “His return is effective immediately, and, starting this moment, Hong is a PPP member.”

Hong, 66, is a former prosecutor-turned five-term lawmaker, best known for his straightforward remarks and political attacks. He won two South Gyeongsang mayoral elections to serve the post until April 2017, when he ran for the first snap presidential election the month following the aftermath of Park Geun-hye’s impeachment and removal from the presidency. Hong was defeated by Moon Jae-in, finishing the race in the second place. Moon scored 41.1 percent, Hong 24 percent and Ahn Cheol-soo 21.4 percent.

During his political career with the largest conservative party, Hong also served as the party chairman twice, in 2011 and from 2017 till 2018. He, however, left the party before last year’s general elections. After the party’s nomination committee decided to not award a candidacy to him, Hong left the party in March 2020, ran independently in Suseong B District of Daegu and won. It was his fifth legislative election victory.

Hong has remained outside of the PPP over the past 15 months but submitted an application to rejoin the party last month. The Seoul Metropolitan City chapter of the PPP approved his application, and the Supreme Council endorsed it — finalizing his comeback.

With Hong’s homecoming, the PPP now controls 103 seats in the 300-member National Assembly.

“The eldest son, who had left his family for an inevitable reason, has now returned home,” Hong wrote on his Facebook.

He also held a press conference at the National Assembly in appreciation of the PPP leadership’s decision. He also made clear that he will make another run for the presidency.

“My homecoming will be a new starting point of my political journey,” Hong said. “I will normalize this country and move toward the new future without hesitation. The country is collapsing due to the Moon administration’s incompetence and failures. Based on free economy and economic democracy, we should restart the wheel of prosperity and growth.”

He also pledged to restore Korea’s alliance with the United States and relations with Japan.

Hong’s plan to return to the PPP ran into an obstacle on Tuesday after Democratic Party Chairman Song Young-gil hinted in a radio interview that Hong must have been behind the file of secrets smearing conservative presidential frontrunner Yoon Seok-youl. Asked if Song was the author of the file, the DP politician said, “Hong should know it the best.”

“I have no idea why Song said I should know about Yoon’s 'X-file,'” Hong said. “I have never seen it, nor do I know anything about it.”

He still said Yoon must face any allegation, if there is any, and clearly explain it. “It is wrong for him to avoid verification by saying the allegations were based on information collected through illegal surveillance,” Hong said.